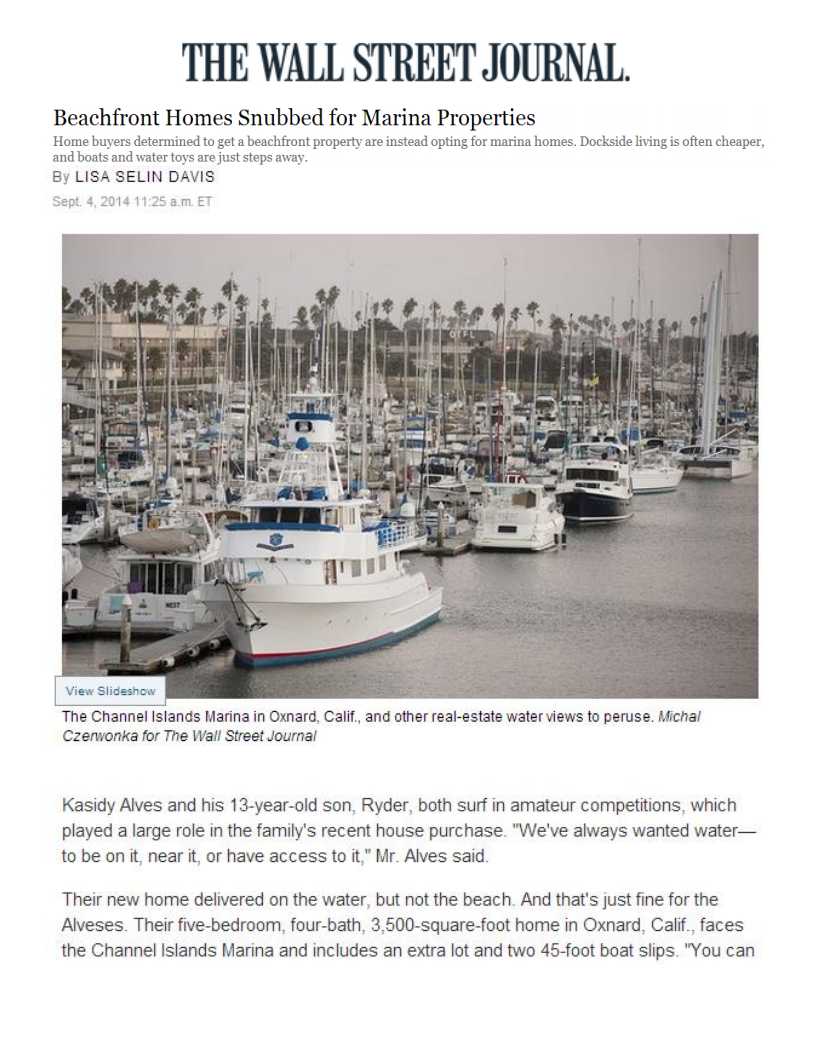 Home buyers determined to get a beachfront property are instead opting for marina homes. Dockside living is often cheaper, and boats and water toys are just steps away.
Kasidy Alves and his 13-year-old son, Ryder, both surf in amateur competitions, which played a large role in the family’s recent house purchase. “We’ve always wanted water—to be on it, near it, or have access to it,” Mr Alves said.

Their new home delivered on the water, but not the beach. And that’s just fine for the Alveses. Their five-bedroom, four-bath, 3,500-square-foot home in Oxnard, Calif., faces the Channel Islands Marina and includes an extra lot and 45-foot boat slips. “You can stand-up paddleboard, jet ski, swim, and it’s right out of your backyard,” said Mr. Alves, the 44-year-old cp-owner of the consumer-electrics company Scosche.

Even as a surfer—one who doesn’t yet own a boat—Mr. Alves opted for the channel. “Beach homes have sand everywhere, and its always windy,” said Mr. Alves, “This is the best of both worlds.”

As waterfront real estate, marinas are having their moment. Home with deeded dock space let owners keep their water toys nearby. Marina-front homes can also make financial sense. They typically cost less and may be cheaper to insure than beachfront homes. And dock spaces included in the sale eliminates the need for a boat-slip rental.

Mr. Alves’s broker, Damian Bourguet, said her customers are increasingly seeing the value of such properties. “They’ll say, ‘I want to be on the beach.’ Then they see the marina and realize their back patio is a dock,” she said. Owners can use the docks to store their kayaks and wave runners with no monthly rental fee. “it’s not just about docking your yacht.”

Ms. Bourguet added that the Alves’s home and extra lot on the marina, purchased for $2.28 million, according to public records, would have cost twice as much if located on a beach.

The popularity of water sports is partly behind the demand for homes with docks. The National Marine Manufacturers Association (NMMA) reported 5% to 7% growth in powerboat sales year-over-year in June 2014, with sales steadily rising since 2010. Personal watercrafts such as Jet Skis are also selling well. In 2013, new-and used-boat sales in the U.S. reached $36.7 billion, according to NMMA.

Some of Mr. Schoepfer’s customers are opting for homes on freshwater ponds and lakes, where flood insurance is much lower. “I’m finding the lakes in Cape Cod enjoying a resurgence because you can get a dock home much easier and for several hundred thousand less than on the beach,” said Mr. Schoepfer, calling the phenomenon “the lake effect.” He recently sold a three-bedroom home on a freshwater pond on the Cape for $565,000. On the ocean, he said, it would have been twice as much.

Ms. Bourguet, who is an agent with Sotheby’s International Realty, said listings in the Ventura County area range between $750 and $1,200 per square foot for beachfront property, while boat-dock properties are $400 to $650 per square foot.

In Miami, year-over-year price increases in the second quarter of 2014 were 47.7% higher on beachfront properties than those on a bay, said real-estate appraiser Jonathan Miller. This is partly because of supply and demand: The bay-front residential market is five times larger. In New York’s Hamptons, on the other hand, bay-view properties saw price gains, while oceanfront didn’t.

Of course, owners of dockless luxury homes in coastal areas can purchase marina space in the general market, where prices have fallen. According to Michael Watson, owner of USABoatSlips.com, a boat-slip classifieds website, a 55-foot slip in Palm Beach Gardens, Fla., that sold for $325,000 in 2066 is now worth $80,000.

Still, dock space is South Florida can fetch a premium. The Ritz-Carlton Residences, Miami Beach is selling 35 private boat slips for $300,000 each to buyers in its 126-unit property, where homes range from $2 million to $32 million. “That’s our competitive edge—in the heart of Miami Beach but affording that lifestyle with boats,” said Ophir Sternberg, the developer. Fifteen boat slips have sold so far.

In nearby Fort Lauderdale, “the cliché goes that (house hunters) can buy a dock for their megayacht and get a house thrown in for free,” said Jim Esposito, a broker with Fort Lauderdale-based Intercoastal Realty. His listings range from modest condos with deeded docks in the low $200,000s to private estates with boat slips for 100-foot yachts for $20 million. “you can drive through these neighborhoods where every house is $4 million to $5 million, and the boat docked out back is actually more expensive than the house,” he said. According to Mr. Esposito, homes with boat slips there can be 30% costlier than inland homes.

But Horacio LeDon, president of development marketing at Douglas Elliman, Florida and California, said wedding the dock to property isn’t always a good idea. If you can’t split them up and sell them individually, you are stuck with the dock even if you don’t want or use it.

For those who have the money, the best investment is still on the beach, Mr. LeDon said. “A beachfront property carries a lot of cachet,” he said. Buyers seeking a home with both a dock and a beach can get a unit at the Conrad Fort Lauderdale Beach Residences, where prices range from $500,000 to $6 million. The development offers boat slips off site, ranging from $1.50 per square foot to $2.55 per square foot, Mr. LeDon said.

The Ritz-Carlton Residences, Miami Beach also found a way to bridge both worlds. One of its slips is reserved for the “house boat” – a 40-foot VanDutch luxury yacht available for residents’ use. The staff captain “can boat you over to the beach,” said Mr. Sternberg.