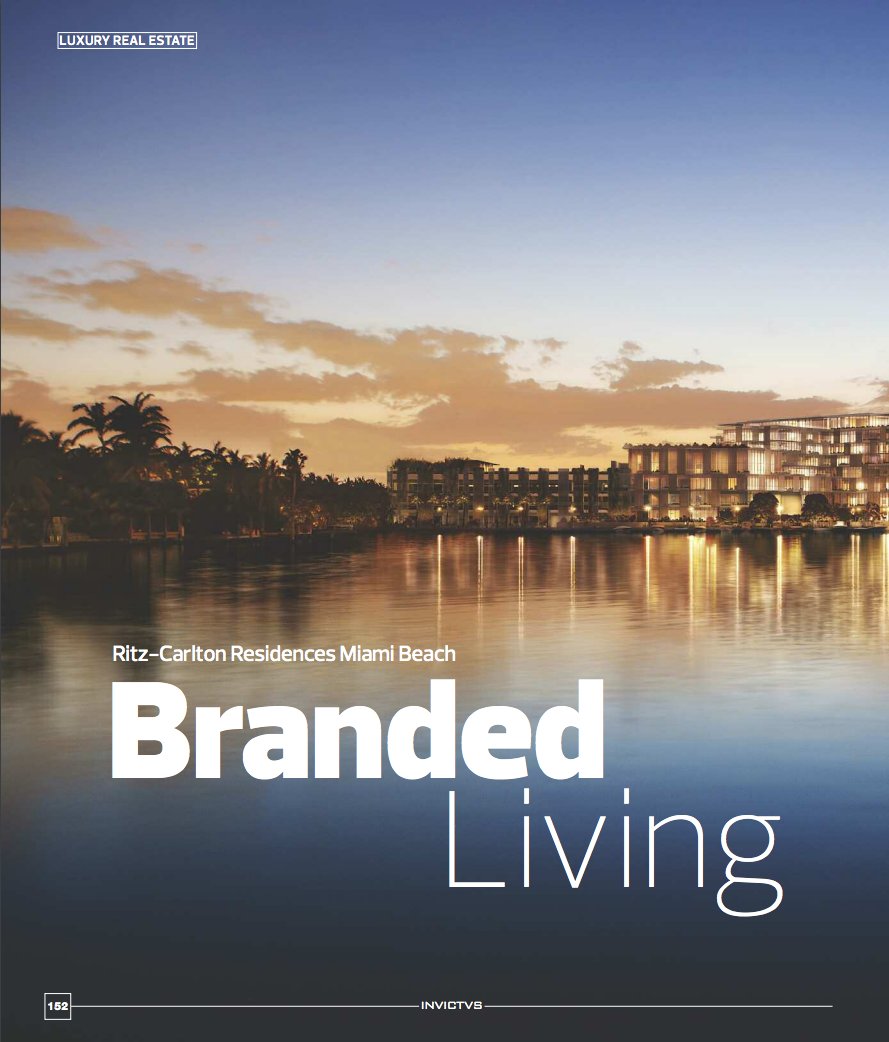 From leading hospitality corporations, luxury auto manufacturers to haute fashion houses, designer labels are rapidly infiltrating the real estate sector as branded developments take center stage. The benefits of investing such projects goes way beyond the confidence in a familiar lifestyle brand and the convenience of additional services and facilities however, it could result in an uplift of up to 30 percent in your property’s value…as we discovered in conversation with the developer of the new Ritz-Carlton Residences scheduled to open on Miami Beach in 2016.

The power of a luxury brand extends far beyond the goods it produces or the services it offers. A powerful luxury brand is as much about a perception and the delivery of quality as it is about an emotional connection created between the consumer and a lifestyle. So it comes as no surprise that stalwart luxury hospitality corporations like Ritz Carlton, Four Seasons, and Mandarin Oriental, as well luxury goods brands like Armani, Missoni, Fendi, and Baccarat have partnered with property developers around the globe to create branded residential developments, where the concept of “luxury living” takes on a new meaning.

The concept is certainly not a new one: luxury hotels have long discreetly offered apartments for those devoted guests who desire luxury living with the daily service and comfort that only a luxury hotel can provide. New York’s Sherry Netherland and The Regent Beverly Wilshire (now a Four Seasons property) are two well-known examples. However, the last two decades have seen a new kind of partnership between developers and brands formed to create not just mere residences, but all encompassing lifestyles where the brand ethos permeates every aspect of the project.

“The Miami Beach project is our second Ritz-Carlton residences.’ Sternberg tells us. “We developed the Ritz Carlton Residences Palm Beach five years ago and that has been very successful.” For the Palm Beach project Lionheart acquired two fully built luxury condominium towers on the ocean, and as part the rebranding strategy the company partnered with Ritz Carlton. “It turned out to be huge success story. Getting to know Ritz Carlton and experiencing what the company can do for a property made us a firm believer in the brand.”

After searching for an exceptional location in Miami, Sternberg found one of the very best. “Originally, there was a hotel on the 7.5 acre site called the King Cole Hotel which had been developed by the founder Miami Beach, which says a great deal: he could have chosen any site for his hotel,” says Sternberg. “It’s a great site in the heart of Miami Beach, in an area called Mid Beach. It’s on an amazing lagoon and opens up to the bay area and intercostal, as well as the sea.”

In partnership with well-capitalized investors Elliot Management, Lionheart sought to assemble a team that together would create an unparalleled luxury residential experience. Enlisting the renowned Italian architect and designer Piero Lissoni, the owners’ amenities will include a waterfront social room with a bar: a catering kitchen; tropically landscape half-acre roof-top pool deck with infinity-edge pool and poolside Grille Restaurant –which will helmed by a well known chef, and will be for the use of resident’s only; a cinema-quality private theater, and art and music rooms round out the offerings on property.

The Residences will also feature access to a private marina with 36 private slips and a VanDutch yacht for private day use. The house car, whose marque is yet to be announced, will also be available for resident’s use. In addition, the complex will have two attended lobbies with 24-hour concierge service, valet parking, and a pet salon suite. Prices range from $2-million to $40-million for a penthouse, of which there are four.

The value added to luxury branded residential properties is significant according to Knight Frank Residential Research: luxury branded residences demand a premium of an average of 31 percent over non-branded equivalent offerings. Armani branded apartments in Dubai’s Burj Khalifa tower, for example, are priced on average at AED 5,000 per sq ft. while non-branded equivalent apartments sell at average AED 3,000 per sq ft; an uplift of 50 percent. The Palazzo Versace and D1 developments, which are adjacent to one another on Dubai Creek, are a more striking comparison: residential units at Palazzo Versace are priced at an uplift of 120 percent against the D1 units.

One doesn’t have to travel so far to witness such remarkable differences however. In Miami, at the Icon South Beach, a residential project developed in conjunction with Yoo-known for their successful residential developments with designers like Philippe Starck, and Anouska Hempel-properties are priced ar a 27 percent premium over comparable non-branded to equivalent developments in the area. When asked about the value that luxury partnership bring to developments in the area. When asked about the value that luxury partnerships bring to development, Ophir Sternberg says, “It depends on the brand and what they bring to the table. Ritz Carlton is a little different than partnering with a design brand; Ritz brings years of experience in luxury hospitality. This is very important to both my buyers and myself, I like fitting the right with the right property, and not every brand is right for what you’re trying to create,” he says.