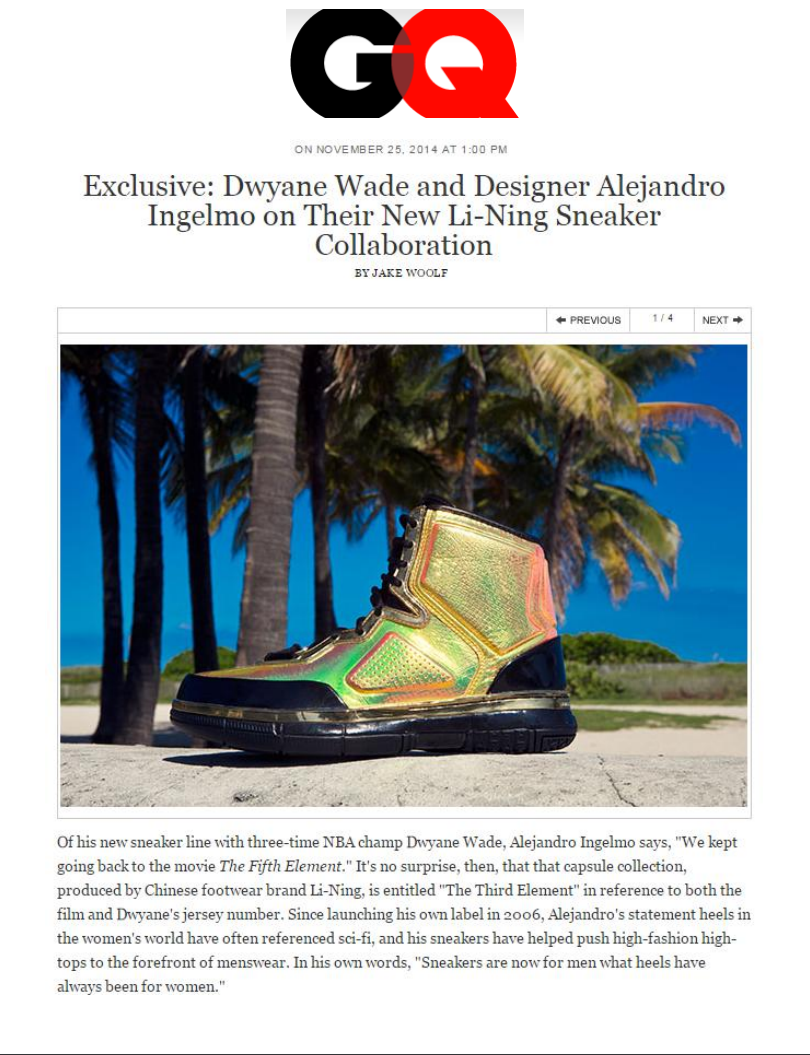 Of his new sneaker line with three-time NBA champ Dwyane Wade, Alejandro Ingelmo says, “We kept going back to the movie The Fifth Element.” It’s no surprise, then, that that capsule collection, produced by Chinese footwear brand Li-Ning, is entitled “The Third Element” in reference to both the film and Dwyane’s jersey number. Since launching his own label in 2006, Alejandro’s statement heels in the women’s world have often referenced sci-fi, and his sneakers have helped push high-fashion high-tops to the forefront of menswear. In his own words, “Sneakers are now for men what heels have always been for women.”

In 2012, Wade made waves when he opted to not renew his contract with Jordan Brand, and instead sign a deal with Li-Ning, a brand that isn’t exactly an icon in American culture. Though it wasn’t the first time an NBA athlete has signed an endorsement contract with the Chinese brand, it could be argued that thanks to creative forces like Ingelmo being brought on to re-imagine the classic basketball sneaker, it has proven fruitful for both parties.

As for their new collaboration, these are shoes for the guy who isn’t afraid of breaking the monochromatic mold, and, like Wade, likely has passion for both fashion and the hardwood. Though Ingelmo admits, “As a kid, my parents didn’t want me to wear sneakers,” today there’s no question that a pair of sneakers with some flair are a staple of any modern man’s wardrobe. On December 3, the three styles will debut exclusively at Dwyane’s hometown boutique, The Webster Miami, and retail for $325. A launch event will take place on Dec 2 at The Ritz Carlton Residences in Miami Beach during Art Basel. We spoke with the NBA superstar for his take on the collection and for insight into his relationship with Ingelmo and Li-Ning.

How did your relationship start with Alejandro?

When [Li-Ning and] I started to think about an off court shoe, we looked around at different designers to see who could help me achieve what I wanted for the sneaker, and Alejandro was the guy. He’s really helped us build our relationship with China, and now I’m excited that we are able to bring some product to the States.

What was your vision for the collaboration?

First and foremost I wanted a sneaker that performed well on the court, but also was able to transfer away from the game into everyday life. So when it came to colorways, design, etc., I wanted to focus on things that could be in both worlds. Obviously I love fashion, and obviously I love sports, so I wanted to bring those two together. Aesthetically, I wanted to make something classic and memorable for Li-Ning.

What inspired the design? Are there any specific reference points?

The biggest thing that I kept coming back to with Alejandro is that it has to be clean and classic. And I’m not talking about color, I’m talking about design. So when you take away the color, there really isn’t a whole lot going on with the shape because we knew we wanted to add a lot more with the colors and patterns.

What are the advantages of working with Li-Ning versus some of the major sneaker brands that work with most athletes in the league?

Well I have worked with Converse and Jordan in the past, but I think with Li-Ning the biggest difference is my role. I am a lot more involved with everything now, even when it comes to developing the brand, which is obviously a lot different than working with those other brands. But I learned from the way Converse and Jordan operate, and applied that knowledge to Li-Ning.

How did your personal taste and style influence the sneaker design?

How has your style changed since you first came into the league? Is there anything that when you look back, you regret wearing?

Well, if you break it down into “the dos and the don’ts” I think I’ve definitely had some don’ts over the years. But do I regret wearing anything? Not really, because it was what I was into at the time. The biggest thing for me in terms of my style changing has just been being more open-minded than I used to be, and being confident in whatever I wear. I want to set trends, and be the first to wear certain things.