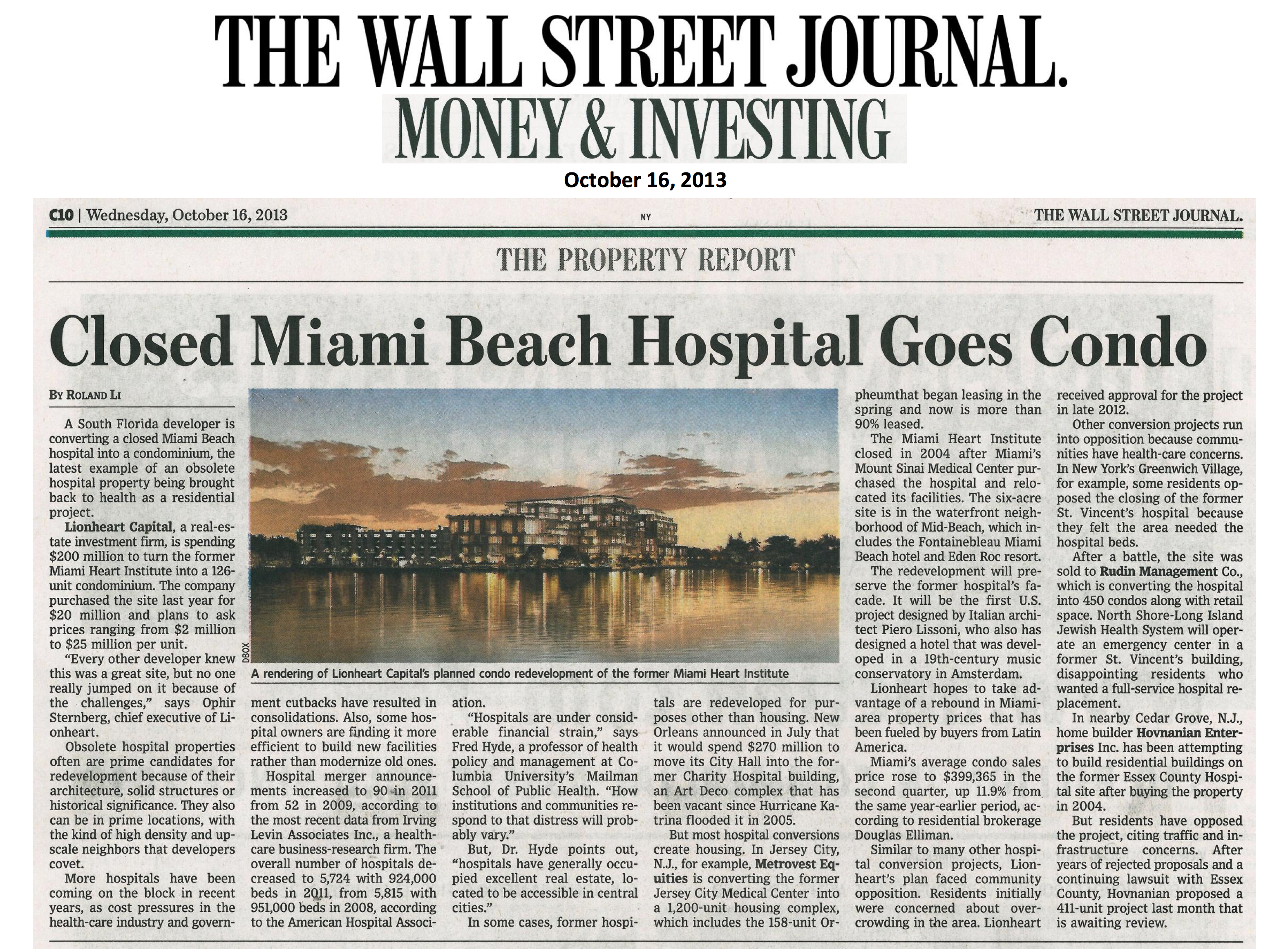 More Hospitals Have Been Coming on the Block in Recent Years

A South Florida developer is converting a closed Miami Beach hospital into a condominium, the latest example of an obsolete hospital property being brought back to health as a residential project.

Lionheart Capital, a real-estate investment firm, is spending $200 million to turn the former Miami Heart Institute into a 126-unit condominium. The company purchased the site last year for $20 million and plans to ask prices ranging from $2 million to $25 million per unit.

“Every other developer knew this was a great site, but no one really jumped on it because of the challenges,” says Ophir Sternberg, chief executive of Lionheart.

Obsolete hospital properties often are prime candidates for redevelopment because of their architecture, solid structures or historical significance. They also can be in prime locations, with the kind of high density and upscale neighbors that developers covet.

More hospitals have been coming on the block in recent years, as cost pressures in the health-care industry and government cutbacks have resulted in consolidations. Also, some hospital owners are finding it more efficient to build new facilities rather than modernize old ones.

“Hospitals are under considerable financial strain,” says Fred Hyde, a professor of health policy and management at Columbia University’s Mailman School of Public Health. “How institutions and communities respond to that distress will probably vary.”

But, Dr. Hyde points out, “hospitals have generally occupied excellent real estate, located to be accessible in central cities.”

In some cases, former hospitals are redeveloped for purposes other than housing. New Orleans announced in July that it would spend $270 million to move its City Hall into the former Charity Hospital building, an Art Deco complex that has been vacant since Hurricane Katrina flooded it in 2005.

But most hospital conversions create housing. In Jersey City, N.J., for example, Metrovest Equities is converting the former Jersey City Medical Center into a 1,200-unit housing complex, which includes the 158-unit Orpheumthat began leasing in the spring and now is more than 90% leased.

The Miami Heart Institute closed in 2004 after Miami’s Mount Sinai Medical Center purchased the hospital and relocated its facilities. The six-acre site is in the waterfront neighborhood of Mid-Beach, which includes the Fontainebleau Miami Beach hotel and Eden Roc resort.

The redevelopment will preserve the former hospital’s facade. It will be the first U.S. project designed by Italian architect Piero Lissoni, who also has designed a hotel that was developed in a 19th-century music conservatory in Amsterdam.

Lionheart hopes to take advantage of a rebound in Miami-area property prices that has been fueled by buyers from Latin America.

Miami’s average condo sales price rose to $399,365 in the second quarter, up 11.9% from the same year-earlier period, according to residential brokerage Douglas Elliman.

Similar to many other hospital conversion projects, Lionheart’s plan faced community opposition. Residents initially were concerned about overcrowding in the area. Lionheart received approval for the project in late 2012.

Other conversion projects run into opposition because communities have health-care concerns. In New York’s Greenwich Village, for example, some residents opposed the closing of the former St. Vincent’s hospital because they felt the area needed the hospital beds.

After a battle, the site was sold to Rudin Management Co., which is converting the hospital into 450 condos along with retail space. North Shore-Long Island Jewish Health System will operate an emergency center in a former St. Vincent’s building, disappointing residents who wanted a full-service hospital replacement.

In nearby Cedar Grove, N.J., home builder Hovnanian Enterprises Inc. has been attempting to build residential buildings on the former Essex County Hospital site after buying the property in 2004.

But residents have opposed the project, citing traffic and infrastructure concerns. After years of rejected proposals and a continuing lawsuit with Essex County, Hovnanian proposed a 411-unit project last month that is awaiting review.