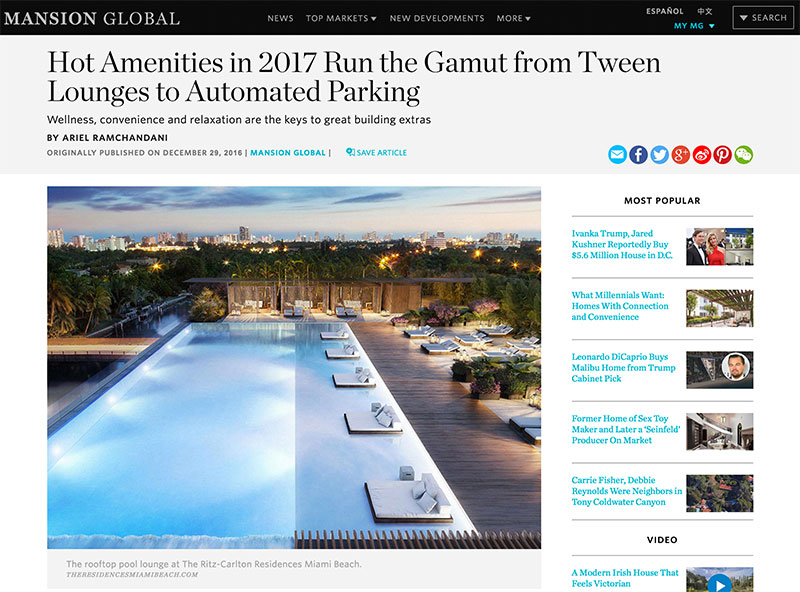 Wellness, convenience and relaxation are the keys to great building extras

In recent years, developers around the world have been allotting increasingly more square footage to amenity spaces.

They’re realizing “they must spend money in order to compete,” said John Gomes of Douglas Elliman, who works with his business partner, Fredrik Eklund, on many new, high-end developments in New York City.

Mr. Gomes encourages developers to market how many square feet of amenity space they’re planning in a new building as a selling point. One of the buildings he’s working on, for example, Madison Square Park Tower, will open in 2017 with five floors of amenities. That’s made clear in the marketing materials.

And while New York might be the capital of luxurious amenities, with myriad new buildings coming to market packed with them, other cities like Miami, London, Boston, and Sydney are stepping up their games as well.

Below are some of the new trends in amenities to look out for in 2017.

As the abundance of supertall residential buildings around the world proves, the sky’s the limit when it comes to development. And it seems the same is true for amenities.

In London, at the South Quay Plaza, located in the London Docklands and opening in 2020, residents of the building, which will be one of the tallest residential towers in the city, can take in the views from an indoor and outdoor residents lounge on the 56th floor, one of the highest resident’s club lounges in Europe.

Sherry Tobak, SVP of Related Sales, who represents the building, said the decision to put all of the amenities on the 50th and 51st floors, which are traditionally reserved for some of the most expensive apartments in condominium building like these, was, “so everyone in the building can take advantage of an incredible view.”

Not to be outdone, in Boston, the new Four Seasons Hotel and Private Residences, One Dalton, which is slated to be the tallest building in New England once it is completed and will launch to the public in 2017, has a lounge and dining room on the 50th floor, overlooking the skyline and the Charles River.

The Ritz-Carlton Residences Miami Beach, opening in 2017, features the world’s first residential art studio, with easels for painting, wall space for canvases, stone for sculpting, and tables for making jewelry and crafts.

Citizen360, on Manhattan’s Upper East Side, which is slated to be completed in 2017, has an art studio and multimedia studio for residents.

And in London’s trendy Shoreditch neighborhood, a new development called The Stage, which launched sales this year and will open in 2017, was created on the site of Shakespeare’s Curtain Theatre, where “Romeo and Juliet” and “Henry V” were first performed. The remains of the theater will become the centerpiece of the development and there will be a performing arts center as well.

Many new developments today cater to some of the most finicky residents of all: tweens and teens. “More and more buildings are having ‘teenage’ playrooms,” said Mr. Gomes. “They’re also having music rooms for kids to practice playing their instruments,”

For example, 100 Barclay, a development that recently opened in New York’s Tribeca neighborhood, offers these music practice rooms, a piano, as well as a specific teen room and lounge, complete with foosball, Playstation, beanbag chairs, and a Nintendo Wii.

Similarly, The Austin Nichols House in Williamsburg, Brooklyn, which launched sales in spring 2016 and will see residents moving in next year, has a “jam room,” which is soundproofed and comes with instruments, so residents can rock out without disturbing mom, dad or neighbors.

And The Kent, which also launched sales in spring 2016 and is set to open in 2017 on Manhattan’s Upper East Side, has some serious rockstar cred. Its “sound lounge,” is designed by Lenny Kravitz, with a performance space and gaming consoles. At One Manhattan Square, a building still under construction on Manhattan’s Lower East Side, 100,000 square feet of amenities will include a teen arcade.

Developers are rolling out the red carpet for buyers’ non-human children, too. Tribeca condo 70 Vestry, which has begun sales and will open in 2018, has a Dog City pet spa on the premises, featuring daycare, grooming and boarding. 15 Hudson Yards will also have dog spa from Dog City when it opens in 2018.

Of course, it’s not just NYC-based pups that are getting pampered. The Ritz-Carlton Residences Miami Beach and Prive at Island Estates, slated for completion next year, on the Intercoastal in Aventura, both feature pet grooming facilities too, so pets can look good at the seaside.

“We never used to include renderings of the gym but that’s because they were more of an afterthought.” Mr. Gomes said. No more.

At Lincoln Square, a new development in London across from the Royal Courts of Justice which launched this summer, designer Patricia Urquiola curated the amenities, which include a high tech gym.

“We wanted to find a world-class designer that could do justice to these fantastic facilities,” said Gabriel York, co-head of Lodha U.K., the developer behind Lincoln Square.

Hammams, or Turkish baths, are still very much in vogue. 520 West 28th, the only property in New York created by the late architect Zaha Hadid, which will open next year, has one. “Clad in honed, hand selected marble,” the private spa suite features has both a warm spa pool, cool plunge pool, waterfall showers, sauna, steam rooms and treatment beds, said Greg Gushee of Related, the building’s developer.

At Brickell City Centre, a mixed-use development in Miami that recently opened, the hammam is made of marble and blush hammered black stone.

Pools are getting dressed up too. In Sydney, at The Lennox, a development which launches next year in Parramatta, the building’s pool cantilevers off the building’s edge, high over the Parramatta river. Three Hundred Collins, slated for completion in 2017 in Miami Beach, has a 75-foot saltwater pool.

In Dubai, The Alef, which is opening next year, has an 820 foot private beach, in addition to cabanas and a spa.

And at 15 Hudson Yards, there will be a full aquatics center with a 75-foot three-lane swimming pool, lounge, shower, whirlpool, steam rooms and saunas. Ms. Tobak explained that the plethora of water amenities at her property were inspired by “aquatic living, right on the water.” (That water, in case you’re wondering, is the Hudson River). “It is a work/live/play environment so you really never have to leave neighborhood, let alone the building to work out.“

With the lines between work and home life continuing to blur, it’s no surprise that buildings are offering work spaces for people to check in with the office on weekends and evenings.

The lounge on the 51st floor at 15 Hudson Yards has communal working spaces with views of the river and the city, as well as conference space and printers, so that residents “can do business in building without having to leave,” Ms. Tobak said.

In San Francisco, at The Austin, in the Lower Polk neighborhood, the public spaces are designed for a tech-centered live work experience. There is wifi throughout all the public spaces, and the lobby lounge and roof deck provide seating and tables for working or lounging.

Sometimes, though, the best amenities are the most practical, and that seems to be the case when it comes to parking.

520 W. 28th has automated robotic parking, via a fully automated conveyor belt system to ease the chore along. “ A seamless and discreet parking experience is a rare and valuable commodity in New York,” said Mr. Gushee. “With this system, residents’ cars will never be dinged or damaged by a valet or neighbor.”

And while parking at that building is taking a high-tech turn, New York buildings across the board are installing “porte cocheres,” separate driveways for residents that are set back from the street, which were particularly popular in stately pre-war building in New York City. At 42 Crosby, for example, a new luxury project in SoHo from Annabelle Selldorf which will open in 2017, there will be a porte cochere, as well a drive-in elevator for underground parking. Old meets new indeed.