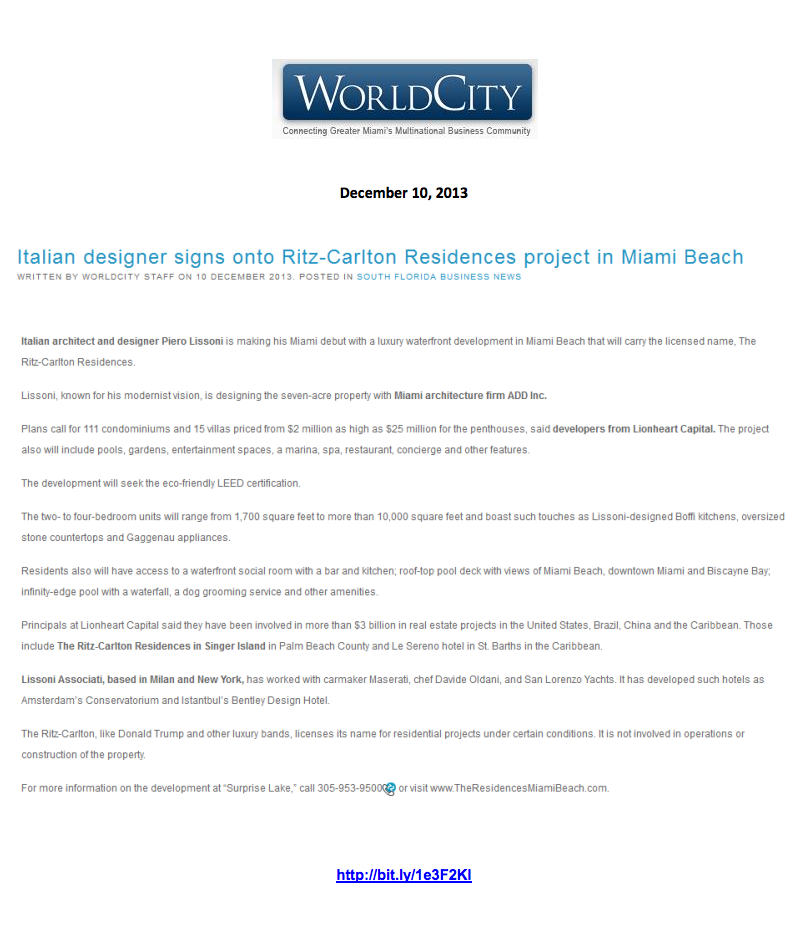 Italian architect and designer Piero Lissoni is making his Miami debut with a luxury waterfront development in Miami Beach that will carry the licensed name, The Ritz-Carlton Residences.

Plans call for 111 condominiums and 15 villas priced from $2 million as high as $25 million for the penthouses, said developers from Lionheart Capital. The project also will include pools, gardens, entertainment spaces, a marina, spa, restaurant, concierge and other features.

The development will seek the eco-friendly LEED certification.

The two- to four-bedroom units will range from 1,700 square feet to more than 10,000 square feet and boast such touches as Lissoni-designed Boffi kitchens, oversized stone countertops and Gaggenau appliances.

Residents also will have access to a waterfront social room with a bar and kitchen; roof-top pool deck with views of Miami Beach, downtown Miami and Biscayne Bay; infinity-edge pool with a waterfall, a dog grooming service and other amenities.

Principals at Lionheart Capital said they have been involved in more than $3 billion in real estate projects in the United States, Brazil, China and the Caribbean. Those include The Ritz-Carlton Residences in Singer Island in Palm Beach County and Le Sereno hotel in St. Barths in the Caribbean.

Lissoni Associati, based in Milan and New York, has worked with carmaker Maserati, chef Davide Oldani, and San Lorenzo Yachts. It has developed such hotels as Amsterdam’s Conservatorium and Istantbul’s Bentley Design Hotel.

The Ritz-Carlton, like Donald Trump and other luxury bands, licenses its name for residential projects under certain conditions. It is not involved in operations or construction of the property.

For more information on the development at “Surprise Lake,” call 305-953-9500 or visit www.TheResidencesMiamiBeach.com.