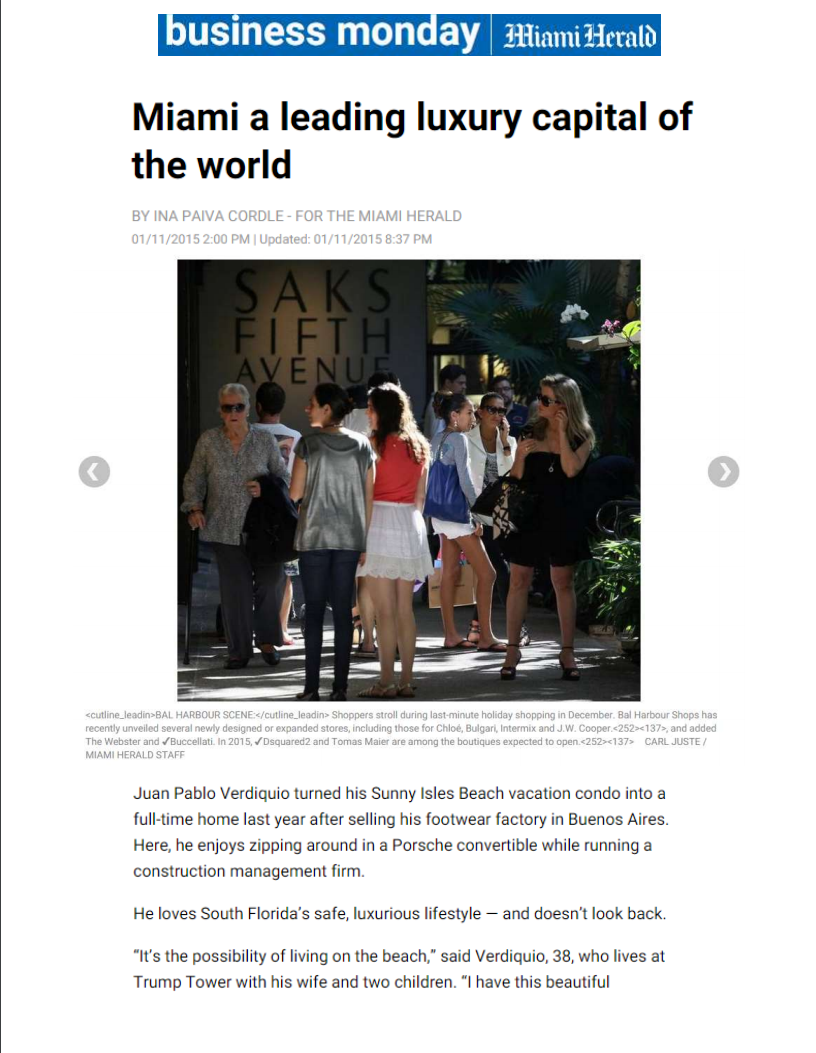 MIAMI A LEADING LUXURY CAPITAL OF THE WORLD

Juan Pablo Verdiquio turned his Sunny Isles Beach vacation condo into a full-time home last year after selling his footwear factory in Buenos Aires. Here, he enjoys zipping around in a Porsche convertible while running a construction management firm.

“It’s the possibility of living on the beach,” said Verdiquio, 38, who lives at Trump Tower with his wife and two children. “I have this beautiful apartment and also a cabana where I can sip coffee and read a book on the beach. And when the kids get out of school, we go boating.”

A cosmopolitan playground for the world’s wealthy, South Florida is increasingly synonymous with luxury in all its many manifestations: multimillion-dollar real estate, exotic cars, yachts, high-end watches, designer apparel. While Miami has long been a flashy, consumerist city, it is now attracting serious wealth from all over the globe — those who won’t flinch at spending millions of dollars for a condo or paying hundreds of thousands of dollars for splashy wheels.

“Miami has really become the American Riviera,” said Ken Gorin, president and chief executive of The Collection in Coral Gables, which sells more Maseratis, McLarens and Porsches, combined, than any other dealership in the United States. “It’s where people want to be.”

Among those now being drawn to Miami are worldwide real estate investors, global financiers, industrial magnates and royal families.

“Miami has become a magnet for capital and people from all over the world,” said Richard LeFrak, the billionaire chairman of New York-based LeFrak, who owns a Miami Beach condo and has transformed the former Gansevoort in Miami Beach with partners Starwood Capital into 1 Hotel & Homes South Beach. Condos there cost up to $20 million.

“Art Basel had a tremendous influence on bringing very high net-worth people to Miami Beach, people who probably remember Miami Beach as where their grandmothers went,” LeFrak said. “They realized the city had become somewhat different. And as a result, they had fun for three days, liked the beach, liked the restaurants, saw that there is an art scene. And it’s America — if you need a cardiologist, you can get it. The best description is it’s an exotic city in a first world country.”

Along the coast in South Florida, one needs only to look upward to see the trappings of the rich: Scores of new condos are coming on line, priced at $1 million-plus — and in excess of $50 million for a pre-construction penthouse at the Faena House in mid-Miami Beach.

“In every conversation about worldwide cities, Miami is in the top five cities,” said Horacio Ledon, president of Douglas Elliman Development Marketing for Florida and California, whose firm markets the Faena project. “It is really checking off all the boxes that make it a world class city — from the arts, to sports, to culture, to lifestyle.”
In Miami, the world’s rich also spend their loot freely on luxury accoutrements. Beyond pricey real estate, think exotic cars, Champagne, sumptuous yachts and international designer goods.

Krug, whose Champagnes begin at $180 a bottle, lists Miami as its ninth top market globally, and its second most important city in the United States, after New York.

Krug’s Miami area sales have grown 10 percent to 20 percent each of the past four years, with the top 30 accounts representing almost 80 percent of that growth, said Maggie Henriquez, president and chief executive of the House of Krug. Among the top accounts: Azul, Cavalli Miami, Dolce Italian, Portofino Wine Bank and Zuma, she said.

Burgess Yachts is also putting its focus on growth in the United States through its operations in Miami, where it markets $10 million to $20 million yachts and sells weeklong charters to the Caribbean and Mediterranean, said Matt Emerson, Burgess’ director of the Americas.

The company, which had two employees here 10 years ago, now has 16 employees with plans for continued growth in 2015, he said.

“We feel that Miami is an international destination where a lot of our potential clients and existing clients have second homes, and there are first class hotels and first class restaurants, and we want to be there,” said Emerson, who is based in New York.

To add to their South Florida experience, the rich can shop at a dizzying array of designer boutiques at various luxury shopping destinations.

Bal Harbour Shops has recently unveiled several newly designed or expanded stores, including those for Chloé, Bulgari, Intermix and J.W. Cooper, and added The Webster and Buccellati. In 2015, Dsquared2 and Tomas Maier are among the boutiques expected to open.

Aventura Mall also has been adding to its luxury roster, with such stores as Tiffany & Co., Fendi, Emilio Pucci, Burberry and Philipp Plein.

And Miami’s Design District is quickly transforming into a luxury shopping destination, with such stores as Louis Vuitton, Prada, Berluti, Hermès, Lanvin, Celine and Bulgari already open. Many more boutiques will be opening in the district in 2015, including Cartier, Ermenegildo Zegna, Valentino, Versace and Givenchy.

Indeed, with so much of the world’s wealthiest visitors here, many of the globe’s most luxurious brands now count Miami as one of their top cities for sales.

Brian H. Lange, president of the Americas for Vilebrequin, the swimwear and resort brand founded in St. Tropez, said its Bal Harbour Shops boutique ranks No. 1 in sales among 147 stores worldwide, and is the largest in terms of square footage.

“We have such an internationally diverse clientele here,” he said. “Everybody comes here.” They come from all over the world, he added, citing France, Italy, Germany, Eastern Europe, Russia, the Middle East, Mexico, Brazil, Colombia and Canada, among the home turfs.

“Miami is the hub of Latin America, so Miami caters to our American clients and our South American clients,” Nolot said. “In the U.S. we have only New York and Bal Harbour, so that tells you how important Miami is, and it is a booming market.”

Similarly Breguet, the Swiss luxury watch brand whose watches range up to $1 million, has a boutique at Bal Harbour, among only four in the United States, including New York, Beverly Hills and Las Vegas.

And Ferragamo, which has a flagship store at Bal Harbour Shops, said it counts Miami among its top U.S. boutiques, along with Honolulu, New York and Beverly Hills.

In real estate, Miami truly stands out, largely due to its growing popularity among international buyers.

“Miami is the most international city in the United States, particularly from a real estate point of view,” said Philip White, president and chief executive officer of Sotheby’s International Realty Affiliates LLC.

According to the report, Cote d’Azur, London and Miami are the world’s most popular second-home markets. In Miami, second-home buyers accounted for 45 percent of luxury sales, defined as $1 million, plus in 2013; Christie’s local affiliate, EWM Realty International, sold a $1 million-plus home on average every 17 hours. Half of luxury sales in Miami were to foreign buyers, with the other half going to domestic buyers, the report showed.

For high-end real estate, that translates to deep-pocketed investors from the Northeastern United States and Europe who “don’t bat an eyelash at paying $3,000 a square foot,” in Miami for a condo at the Bath Club, for example, where prices start at $9 million, said Ledon, of Douglas Elliman Development Marketing.

Indeed, Miami and New York were the only North American cities to make the top 10 list in the 2014 Wealth Report, issued annually by London-based real estate consultancy Knight Frank. The March 2014 report’s Global Cities Survey ranks cities based on four factors: economic activity, quality of life, knowledge and influence and political power. It also takes into account the number of ultra-high net worth individuals who call each city home.

Miami, which ranked No. 7 on the top 10 list, outranks every other city in the Western Hemisphere with the exception of second-ranked New York. Miami outperformed Paris, Beijing and Dubai. And the Global Cities Survey predicts that Miami will remain in the top 10 for at least the next decade.

Still, while South Florida’s economy and real estate market are being fueled by wealthy foreign buyers, the region remains divided by the haves and have-nots.

If the study were to add international visitors with second, third or fourth homes here, the income levels would surely soar, experts say.

For Sotheby’s, which focuses on the high-end real estate market, Miami ranks among its top 10 cities globally, White said. Among the reasons foreign buyers are attracted to Miami: it’s still a bargain compared to other luxury cities like London or Hong Kong, he said.

Jillian Rollinger, vice president of international development and sales for Sotheby’s in Dubai, said the top 25 percent of her clients from the Gulf region are investing in South Florida. As an example, a royal family (which she would not name and would say only that they are from from the Middle East) has bought a $5 million-plus pre-construction villa at the Ritz-Carlton Residences in mid-Miami Beach.

“Miami has now become a very solid market,” Rollinger said, adding that families from Saudi Arabia, the United Arab Emirates and Qatar have been drawn to the luxury lifestyle here as well as to the educational offerings.

Wealthy South Americans have long been drawn to South Florida, too.

Verdiquio, the Argentine transplant, first purchased his Trump Tower condo in 2008 to spend summer vacations. Since then, he has not only moved here, but has bought two more pre-construction condos at Porsche Design Tower and Residences by Armani/Casa — all Dezer Development projects.

The first thing he did here, he said, was buy a Porsche 4S convertible.

For sure, driving around South Florida, luxury and exotic cars like Verdiquio’s often dominate the roadways. Many are driven by out-of-towners who want a snazzy car while they visit their vacation homes.

“Miami is always going to be a trendsetter for fashion and luxury,” said Peter Grady, president and chief executive of Maserati North America, based in Englewood Cliffs, New Jersey. “We see that in South Florida more than anywhere else. Some of that is driven by the international nature of the clientele: You may have someone with a home in Rio and New York and Miami looking for a vehicle in all those cities.”