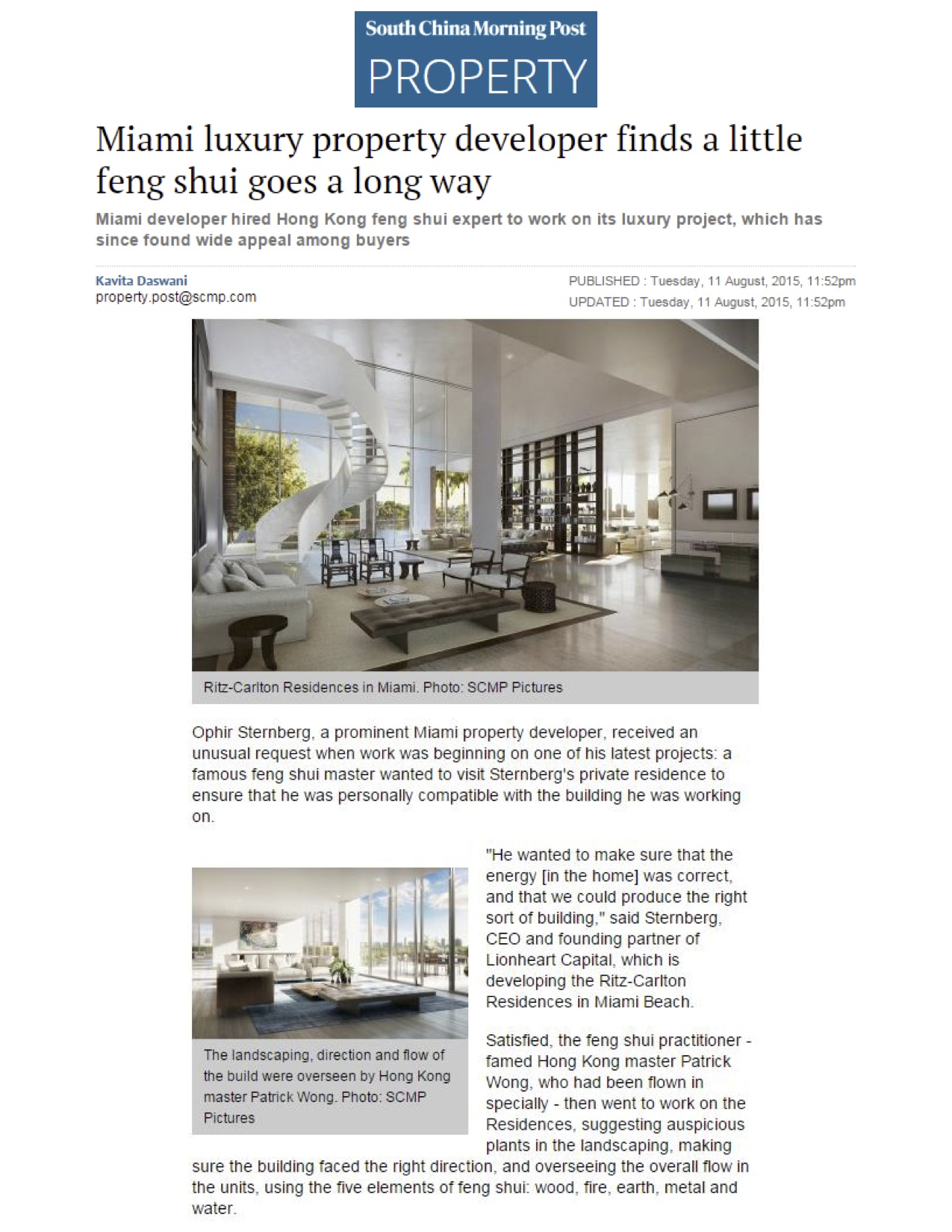 Ophir Sternberg, a prominent Miami property developer, received an unusual request when work was beginning on one of his latest projects: a famous feng shui master wanted to visit Sternberg’s private residence to ensure that he was personally compatible with the building he was working on.

“He wanted to make sure that the energy [in the home] was correct, and that we could produce the right sort of building,” said Sternberg, CEO and founding partner of Lionheart Capital, which is developing the Ritz-Carlton Residences in Miami Beach.

Satisfied, the feng shui practitioner – famed Hong Kong master Patrick Wong, who had been flown in specially – then went to work on the Residences, suggesting auspicious plants in the landscaping, making sure the building faced the right direction, and overseeing the overall flow in the units, using the five elements of feng shui: wood, fire, earth, metal and water.

Clearly, something is working. Although the building won’t be completed until the end of 2016, 60 per cent of the 127 units are already sold, with buyers from Europe, Latin America and, of course, China.

As Sternberg discovered, high-end developers in the US courting affluent Chinese buyers are finding that a little geomancy can go a long way.

“They genuinely appreciate that we went to the next step,” said Karen Rodriguez, exclusive listing broker for The Residences at Mandarin Oriental in Atlanta. “It showed our level of respect, and the fact that the details are very important to us.”

The feng shui consultants brought in to the Mandarin Residences helped to figure out layouts, eliminating odd angles and making sure bloopers were avoided, such as the foot of the bed being immediately visible upon entering a bedroom. Additional steps have been taken to tap into the vibrant Chinese market: the pricing on the units end in the number eight.

In some cases fortuitous feng shui was a matter of happenstance. 50 West, in Manhattan’s financial district, was built without the oversight of a feng shui master.

But after a few Chinese buyers mentioned the units had exceptionally positive energy the developers were intrigued enough to do some research.

“What we were told was that even though we hadn’t planned it that way, the building satisfied many feng shui requirements,” said Roberta Axelrod, director of the residential division at Time Equities in New York, developer of 50 West. “The experts said that positive feng shui qualities were in the floor-to-ceiling windows, the open views of the water to the west and the south, and that the building itself is curved, which, according to feng shui, is considered an embrace that holds in the energy. Our buyers from Asia are very conscious of it, using words like ‘harmony’ and ‘balance’.” Half of the 191 units are sold, with prices ranging from US$2 million to upwards of US$22 million. The building are slated to be move-in ready in autumn next year.

Certainly, while appealing to Chinese buyers may have supplied the original impetus for high-end developers, they are finding the appeal of a building designed in accordance with the principals of feng shui goes far beyond that.

“China is not the only market that responds so positively to it,” said Peggy Fucci, CEO of OneWorld Properties in Miami. Her company is the exclusive brokerage for Paramount Miami Worldcentre, a residential building to be completed by the end of 2018. Forty per cent of the 513 units in the building are reserved, with about 15 per cent of those by Chinese buyers. In the case of Paramount, feng shui consultants didn’t just advise on the specifics of the building, but also gave presentations to the brokers so the feng shui aspect became an effective sales tool.

“This is still a very new concept for a lot of people,” said Fucci. “We want to make sure our brokers know what this represents to the buyer.”

In addition to the five elements being applied throughout the property, the entry area is being designed to attract abundance and success. The consultant suggested the use of the colour red in certain areas, and to avoid sharp, pointy plants. Earth tones and natural elements were important, and the building’s number – 851 – is deemed positive, said Fucci.

Fucci is confident that by the time the building is completed, the Chinese buyer – just beginning to appear as an important part of the luxury Miami property scene – will be a major force. The traditional investor in Miami property has been from Latin America, but as that market has become saturated, the city’s developers are tapping into China.

“It’s a market we are now very focused on, and we are prepared to accommodate this demographic in many ways,” she said.