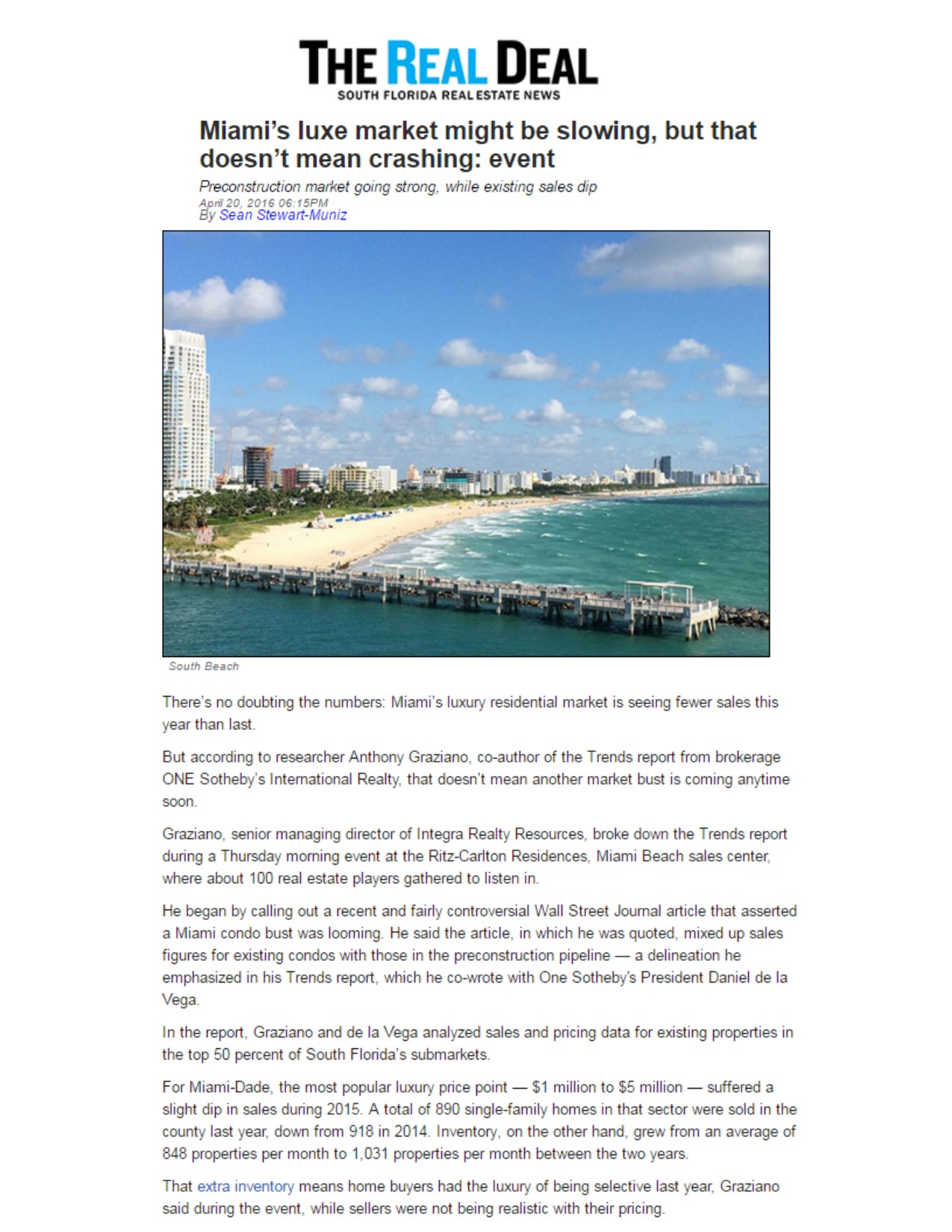 Miami’s Luxe Market Might be Slowing, but that Doesn’t Mean Crashing: event

But according to researcher Anthony Graziano, co-author of the Trends report from brokerage ONE Sotheby’s International Realty, that doesn’t mean another market bust is coming anytime soon.

Graziano, senior managing director of Integra Realty Resources, broke down the Trends report during a Thursday morning event at the Ritz-Carlton Residences, Miami Beach sales center, where about 100 real estate players gathered to listen in.

He began by calling out a recent and fairly controversial Wall Street Journal article that asserted a Miami condo bust was looming. He said the article, in which he was quoted, mixed up sales figures for existing condos with those in the preconstruction pipeline — a delineation he emphasized in his Trends report, which he co-wrote with One Sotheby’s President Daniel de la Vega.

In the report, Graziano and de la Vega analyzed sales and pricing data for existing properties in the top 50 percent of South Florida’s submarkets.

For Miami-Dade, the most popular luxury price point — $1 million to $5 million — suffered a slight dip in sales during 2015. A total of 890 single-family homes in that sector were sold in the county last year, down from 918 in 2014. Inventory, on the other hand, grew from an average of 848 properties per month to 1,031 properties per month between the two years.

That extra inventory means home buyers had the luxury of being selective last year, Graziano said during the event, while sellers were not being realistic with their pricing.

“That’s why you feel like you can’t get a deal done,” he said.

Condo sales for the $5 million to $10 million range held steady year-over-year with 61 units, while the $10 million-and-up sector fell by two sales to 8 properties last year.

“A lot of that inventory fell in as the market kept getting better,” Graziano said, referencingSouth Florida’s rising home prices. “A very large piece of that is not appreciation, it’s value recovery [from the crash].”

Part of the reason for Miami’s luxury slowdown is global economics, Graziano said. Many luxury buyers are businesspeople who were affected by last year’s plunging stock market and the volatility of foreign countries’ economies.

“They’re on the front lines of what’s happening in the economy,” he said. “The stock market was a terrible deflater of business.”

Even the presidential election, he said, is causing hesitancy in the market as buyers wait for the smoke to clear after inauguration day.

“I can’t say enough about this silly presidential election,” he said. “May it be over as soon as possible.”

As for Miami’s new condo developments, Graziano said 73 percent of the preconstruction market is sold.

For downtown Miami, what Graziano called the region’s most visible and frequently scrutinized condo market, there are currently 7,300 units under construction, 85 percent of which are already sold. Compared to 2006 right before the bust, downtown Miami had roughly 16,000 units coming out of the ground.

In addition to having about half the inventory compared to last cycle’s boom, the preconstruction market has insulated itself from leveraged buyers by requiring 50 percent deposits. Roughly 78 percent of deals in the preconstruction condo market were paid with cash last year, and 64 percent of existing condo buyers also paid without financing.

So although sales have taken a hit in the short term, he said a lack of leveraged deals and significantly smaller supply will keep the condo market from going belly-up.

“I don’t think the global economy is coming back anytime soon,” he said. “2016 will be slower and harder to predict.”