The Ritz-Carlton Residences, Miami Beach Condos in The Peak 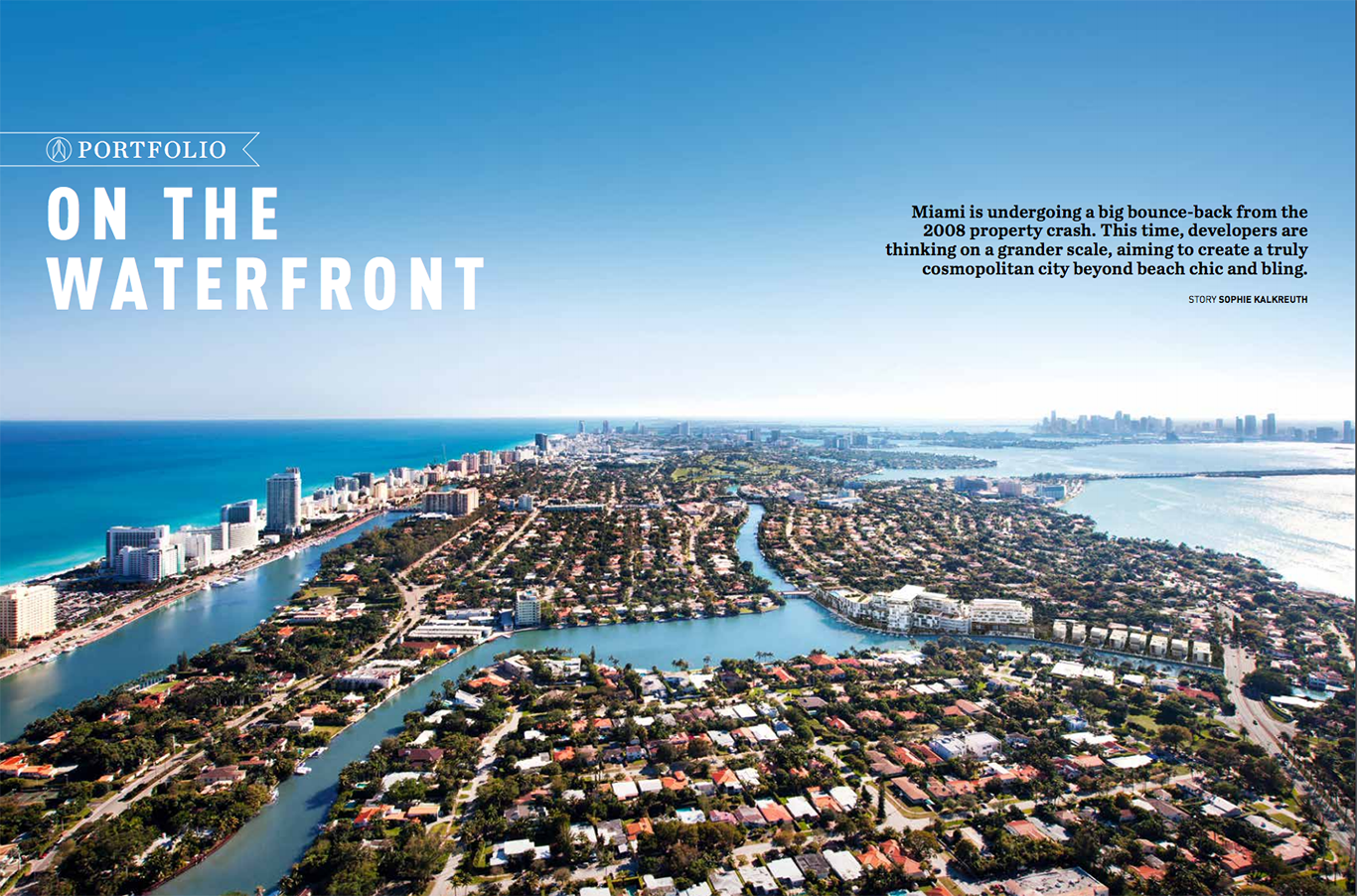 On the Waterfront: Miami Allows its urban seaside allure to shine.

Miami is enjoying a design renaissance. With Art Basel Miami Beach well into its second decade and the debut of Maison et Objet Americas this year at the New World Center, the city is improving its status as a hub of art. “Miami is in a real boom architecturally, culturally, and economically,” says Karim Rashid, the prolific industrial designer whose Paraiso Bayviews development is taking shape in Edgewater. “And it is a real design-driven city-the most design driven in North America,” he says.

Rashid joins a distinguished group of renowned architects, including Richard Meier, Zaha Hadid, Rem Koolhaas, and Chad Oppenheim, who are flocking to the city to design luxury towers along or near the waterfront.

Covering just 1 acre on Biscayne Boulevard, Zaha Hadid’s One Thousand Museum will rise 62 floors and offer 83 residences. When complete in 2017, it will distinguish itself from its neighboring towers with its undulating white exoskeleton. It is the Pritzker Prize-winning architect’s first skyscraper in the Western Hemisphere, and clear coup for Miami, which has long jockeyed for architectural relevance against other destination cities like New York, Chicago, and Los Angeles. With its proximity to the 30-acre urban Museum Park-currently undergoing a renovation that includes the addition to the new Patricia and Philip Frost Museum of Science-the building promises to revitalize Biscayne Boulevard. Amenities will include elevators with “destination entry” smart technology, full-floor residences, a private helipad, and cabinetry by the innovative Italian design firm ItalKraft with integrated appliances from Gaggenau.

The Surf Club Four Seasons, a Richard Meier & Partners-designed luxury residential and hotel development, will snag 965 feet of Atlantic Ocean frontage on 9 acres, all but enveloping the landmark Russell Pancoast Surf Club. Its four glass towers are nearly complete and, with occupancy slated for spring 2016, 75 percent sold at press time.

Even Miami’s sleepier waterfront enclaves are getting a boost from luxury developments. Mid-Beach, best known for its grand single-family homes, will soon accommodate the Ritz-Carlton Residences, Miami Beach, designed by Piero Lissoni, who is known for outfitting Luciano Benetton’s super yacht. Lissoni’s design, which includes sleek Xile kitchens by Luigi Massoni for Boffi, with Gaggenau appliances, continues the tradition of a European influence on Miami, with a modern bent.

Designed by Los Angeles firm Arquitectonica, the low-slung, pyramid-like Fendi Chateau Residences are appealing to a wide audience. “We are attracting a balance of both domestic and international buyers looking to purchase in a luxury branded development,” says Manuel Grosskopf, president of Chateau Group, the developer. “We are seeing buyers from the Northeast and Midwest, Canada, London Russia, and Latin America.” At over 80 percent sold, the building features interior design by Fendi and Fanny Haim, and 300 lineal feet of oceanfront beach. “Today’s global buyer is more discerning than ever,” says Grosskopf.” They are brand oriented with a desire for a low-density development with white-glove services.”

With residences from Rene Gonzalez (Louver House), Herzog and de Meuron (Jade Signature), and Isay Weinfeld (Shore Club) on the horizon, as well as unparalleled ocean views, Miami is cementing its global appeal-and architectural significance. “It is something that our firm has been a proponent of, especially with residential buildings, which for a long time didn’t get that attention. We are now seeing it globally, where residential buildings represent the highest level of architecture.”