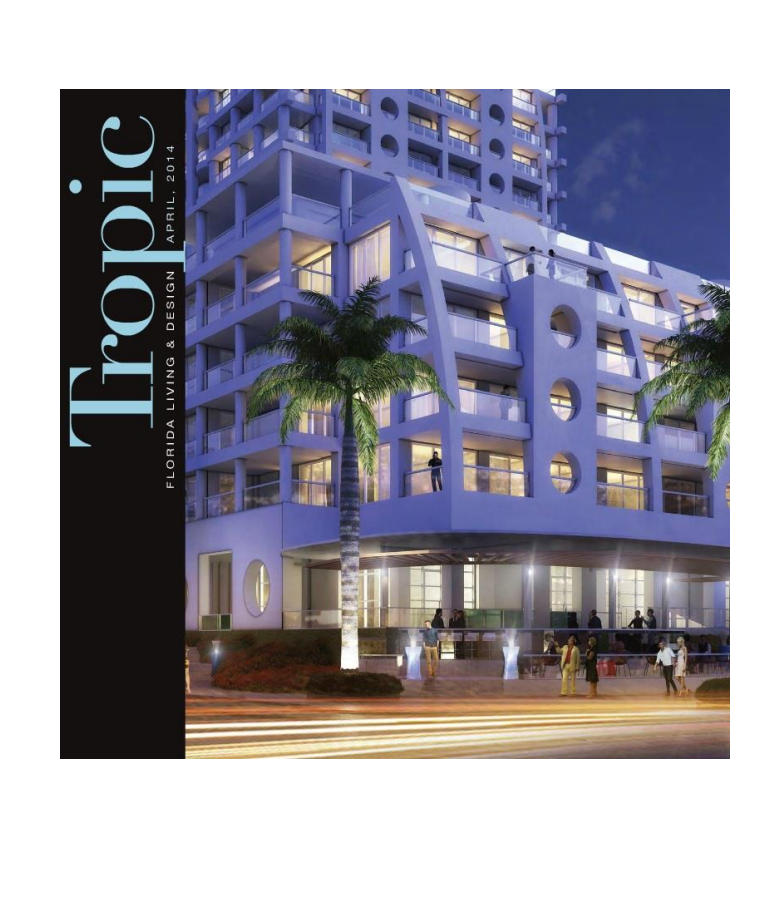 PUTTIN’ ON THE RITZ

In January of 2009, as the Bush White House quietly packed up and left Washington, the Dow was at an anemic 7,949 and the unemployment rate was at 7.8% and growing like a fever. The next few years were not happy ones as America picked up its collective bootstraps and trudged on, many of us unified in working for a better tomorrow. Cut to March of 2014, and, as we go to press, the Dow hovers over 16,000 and unemployment is about 6.7% with new jobs numbers the best they have been in a long while.

What does that translate for us here in South Florida? Well, with a major portion of our economic pie coming from tourism, it means jammed restaurants, filled hotels, busy cruise ships and happy shopkeepers. It also means more people purchasing a vacation home and smart developers working to move product to the market now, not six years from now.
In this issue of Tropic we look at two creative projects, one in Miami Beach and one in Fort Lauderdale, both of which have names that glitter like gold; Ritz-Carlton and Conrad. We say creative as both plan on taking projects already very worthwhile and, through great design and with lots of cash, creating finished properties that each have the potential of being the pinnacle in their respective leagues. The Conrad Hotel and the Residences has been announced as the ‘flag’ for a 24-story, Michael Graves-designed tower overlooking the Atlantic in Fort Lauderdale. In Miami Beach, Lionheart Capital has hired Piero Lissoni to oversee the reimagining of the Miami Heart Institute, stripping it to the bone and sculpting the compound into the seductive Ritz-Carlton Residences facing the waters of Surprise Lake.

That these imaginative repositionings are happening should surprise no one, Florida is, and always has been, a land of cycles in a real estate and once again, South Florida has proven this by bouncing back, bigger and stronger than before.

Architect Piero Lissoni is an all-around powerhouse. After receiving his degree from Milan Polytechnic he co-founded Lissoni Associates with Nicoletta Canesi. The duo went on to found Graph X their adjunct graphic design firm and Lissoni has gone on to design everything from building to home furnishings to corporate identity programs with a minimal, Italian flair. Recently, Lissoni was tapped by Lionheart Capital to rethink a set of existing buildings on the shores of Surprise Lake in Miami Beach. To some, this might have been a daunting task, but for Lissoni, the task of taking an adaptive re-use project and turning it into a world-class destination is nothing new. Quite the opposite, it’s something at which the micromanaging Lissoni excels. The architect transformed Amsterdam’s Neo-Gothic Conservatory of Music into the drop-dead gorgeous Conservatorium Hotel just a few years back, and completed the cutting edge Studio M Hotel in Singapore recently as well.

For the Ritz-Carlton Residences in Miami Beach, a project located in a quiet neighborhood of single-family homes, Lissoni and the Miami firm of ADD Inc. have created a vision of what living in Miami Beach should be. Far from the madding crowds of South Beach, this design team has developed a series of residences spread over seven acres that try very hard to live with nature, not ignore it…Walls of glass are everywhere you look in this series of buildings, sliding open to the fresh tropical air and lush gardens that surround the property.

Modern brise soleil elements are interspersed at the edge of the complex’ extensive balconies and terraces, giving the buildings a dramatic, albeit elegantly simple appearance. The interiors continue this minimalist aesthetic, one the design team makes special through a judicious use of natural materials throughout the project. Yes, of course, as a Ritz-Carlton flagged Residence, you can expect 24-hour concierge-attended lobbies, infinity-edge pool and cabanas, but it’s the way these are proposed to be finished by the design team that sets this property above the crowd. Volumetric, two-story lobbies furnished with timeless modern pieces lead to elevators that- in most cases bring you directly into your own private foyer.

Inside the 1,700 to 10,000 square foot residences, the Lissoni touch continues, as kitchens are custom-crafted by Boffi. (Lissoni has designed numerous collections for Boffi since 1989) Appliances are all Gaggenau, right down to the built-in espresso maker. This attention to detail extends to the bathrooms as well, fitted with natural wood vanities topped with Lissoni-designed marble vessel sinks and glass-enclosed rain showers.

In the end though, it is a masterful connection to location that is most important here, as these 111 condominiums and 15 single-family villas promise, to take advantage of their quiet, lakeside location with extensive gardens, rooftop pools and of course, a private, 36-slip marina that will allow owners to live in Miami Beach the way it was conceived almost 100 years ago: automobile in the garage on one side, boat in the water on the other. What could be nicer than that?