SNEAKERS IN THE SPOTLIGHT AT ART BASEL IN MIAMI - The Ritz-Carlton Residences, Miami Beach 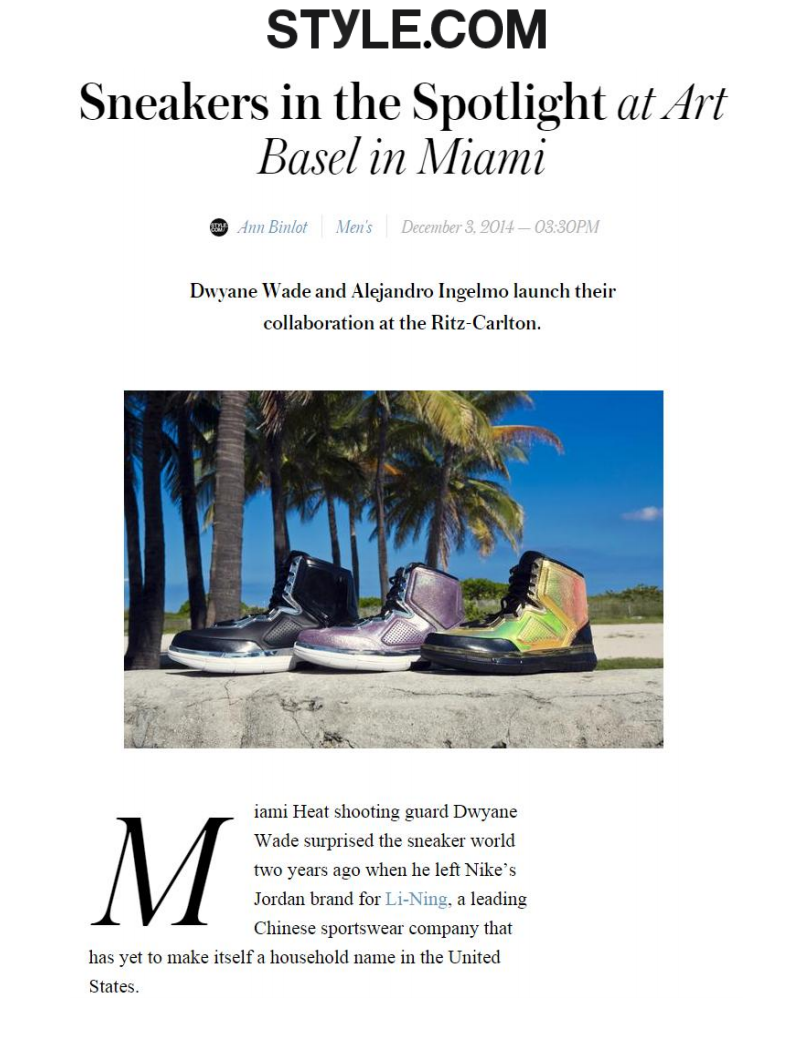 SNEAKERS IN THE SPOTLIGHT AT ART BASEL IN MIAMI

Sneakers in the Spotlight at Art Basel in Miami
December 3, 2014

Dwyane Wade and Alejandro Ingelmo launch their collaboration at The Ritz-Carlton.

Miami Heat shooting guard Dwyane Wade surprised the sneaker world two years ago when he left Nike’s Jordan brand for Li-Ning, a leading Chinese sportswear company that has yet to make itself a household name in the United States.

Last night, Wade, who just returned to the Miami Heat’s starting lineup Sunday after a hamstring injury, used his day off to make an Art Basel appearance at The Ritz-Carlton Residences for the launch of his newest Li-Ning sneaker collection, Third Element, a collaboration with footwear designer Alejandro Ingelmo, who has his own namesake line and consults for some of the biggest luxury labels.

Wade, who was dressed in an Armani tuxedo jacket and iridescent gold Third Element high-tops, is arguably one of the most stylish players in the NBA. His hope with the slick high-top sneakers is that Li-Ning will break into the lifestyle space. “When you talk about design, (We were interested in) something that was kind of classic and sleek. But how do you bring materials to life, and how do you add to it and make it colorful and wild and all those things?” said Wade.

“He wanted to create something that was more fashionable, that was off the court,” added Ingelmo, who also counts Wade as one of his fans.

Wade hopes that he could do for Li-Ning what Michael Jordan did for Nikes. “I think every athlete would love to do something point-one-percent close to what he was able to do,” he said. “My job is to continue to grow the Wade brand (Way of Wade) within Li-Ning, and hopefully do something that lasts a long time, and I think getting with people like Alejandro to design sneakers is kind of taking it somewhere it hasn’t been, so hopefully we can continue to keep growing.”

But don’t expect to see Wade sporting the sneakers tonight when the Heat goes against the Atlanta Hawks. “These are more off the court,” said Wade. “I got sneakers for the court. I really wanted to do something that was lifestyle away from the game, and something that I could rock with in my everyday wear and be as comfortable as I am on the basketball floor.”