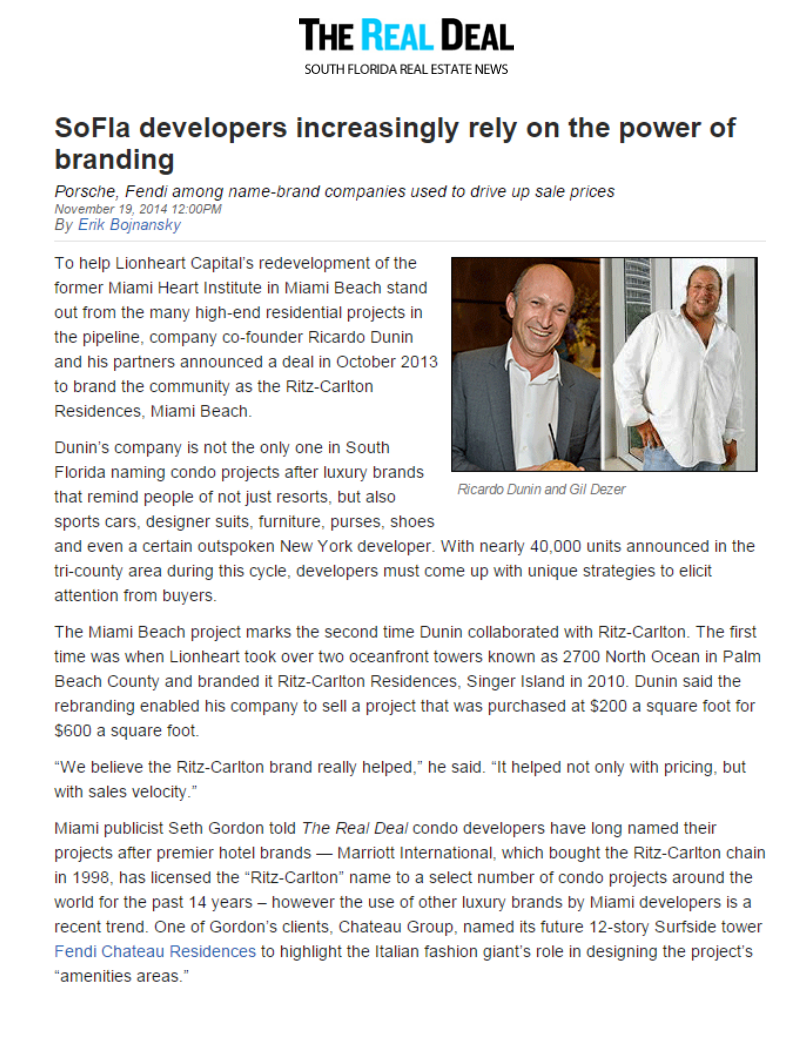 SOFLA DEVELOPERS INCREASINGLY RELY ON THE POWER OF BRANDING

SoFla developers increasingly rely on the power of branding

To help Lionheart Capital’s redevelopment of the former Miami Heart Institute in Miami Beach stand out from the many high-end residential projects in the pipeline, company co-founder Ricardo Dunin and his partners announced a deal in October 2013 to brand the community as The Ritz-Carlton Residences, Miami Beach.

Dunin’s company is not the only one in South Florida naming condo projects after luxury brands that remind people of not just resorts, but also sports cars, designer suits, furniture, purses, shoes and even a certain outspoken New York developer. With nearly 40,000 units announced in the tri-county area during this cycle, developers must come up with unique strategies to elicit attention from buyers.

The Miami Beach project marks the second time Dunin collaborated with Ritz-Carlton. The first time was when Lionheart took over two oceanfront towers known as 2700 North Ocean in Palm County and branded it Ritz-Carlton Residences, Singer Island in 2010. Dunin said the rebranding enabled his company to sell a project that was purchased at $200 a square foot for $600 a square foot.

“We believe the Ritz-Carlton brand really helped,” he said. “It helped not only with pricing, but with sales velocity.”

Miami publicist Seth Gordon told The Real Deal condo developers have long named their projects after premier hotel brands- Marriott International, which bought the Ritz-Carlton chain in 1998, has licensed the “Ritz-Carlton” name to a select number of condo projects around the world for the past 14 years- however the use of other luxury brands by Miami developers is a recent trend. One of Gordon’s clients Chateau Group named its future 12-story Surfside tower Fendi Chateau Residences to highlight the Italian fashion giant’s role in designing the project’s “amenities areas.”

“A lot of people feel comfortable being associated with luxury brands,” said Gordon, who lives in the Residences at The Ritz-Carlton, Coconut Grove, which opened in 2002.
Dezer Development president Gil Dezer told TRD he is “addicted to branding.”

Back in 2002, Dezer and his father Michael made a deal with celebrity developer Donald Trump that allowed them to build six Trump-branded high-rises in Sunny Isles Beach. More recently, Dezer moved on to other brands for Sunny Isles projects, such as Porsche Design Tower and Residences by Armani Casa.

So far, Dezer believes his branding addiction has served him well.

“We found that the branding gets us a higher level of attention from buyers than projects named Wind, Wave, or whatever other random names that have been used,” Dezer said.
That attention translates to sales.

The 60-story Armani project, where unit prices range from $1.35 million to $5.6 million, was 85 percent sold within three days. Of the 132 units in the 60-story Porsche Design Tower, where units are priced between $6 million and $32.5 million, only 12 remain unsold. Dezer is now partnering with the Related Group to build a 31-story tower in Midtown Miami branded after the Hyde hospitality chain he expects his future projects to also have luxury brand affiliations.

“We spend a lot less money marketing because we get a lot of free press,” Dezer said. “That’s been invaluable, really. It pushes sales, creates awareness and a great buzz.”
Lionheart’s Dunin is aware of the power- and pitfalls- of branding. He’s studied its impact as he developed various projects in South Florida, Brazil and Saint Barthelemy since the 1980s.

“A brand is not always desirable,” Dunin said, noting that branding a beachfront project within the 400-year-old city of Rio de Janeiro, for example, would make little difference.

Branding comes at a fiscal cost too.

Dunin declined to disclose specific contract terms between his company and Ritz-Carlton. He said a company will typically receive a flat licensing fee plus 5 percent of the condo sale proceeds from a developer.

“It’s more than just a name,” Dunin said. “When you buy a branded property like a Ritz-Carlton, you get the Ritz-trained personnel.”

The Ritz-Carlton Residences, Miami Beach, which is being designed by Italian architect Piero Lissoni and Miami-based firm ADD Inc., will have 24-hour concierge service, 36 private boat docks, a half-acre roof-top pool deck with a waterfall and cabanas, a poolside restaurant, at least two bars, a whirlpool spa, a private cinema and various other amenities. The 111 condo residences and 15 single-family villas, ranging from 1,700 to 10,000 square feet in size, are priced between $2 million and $40 million.

Dunin did not want to give hard scale numbers, but did say the prospect of living in a Ritz-Carlton style community has generated plenty of interest.

“People love the brand,” he said.