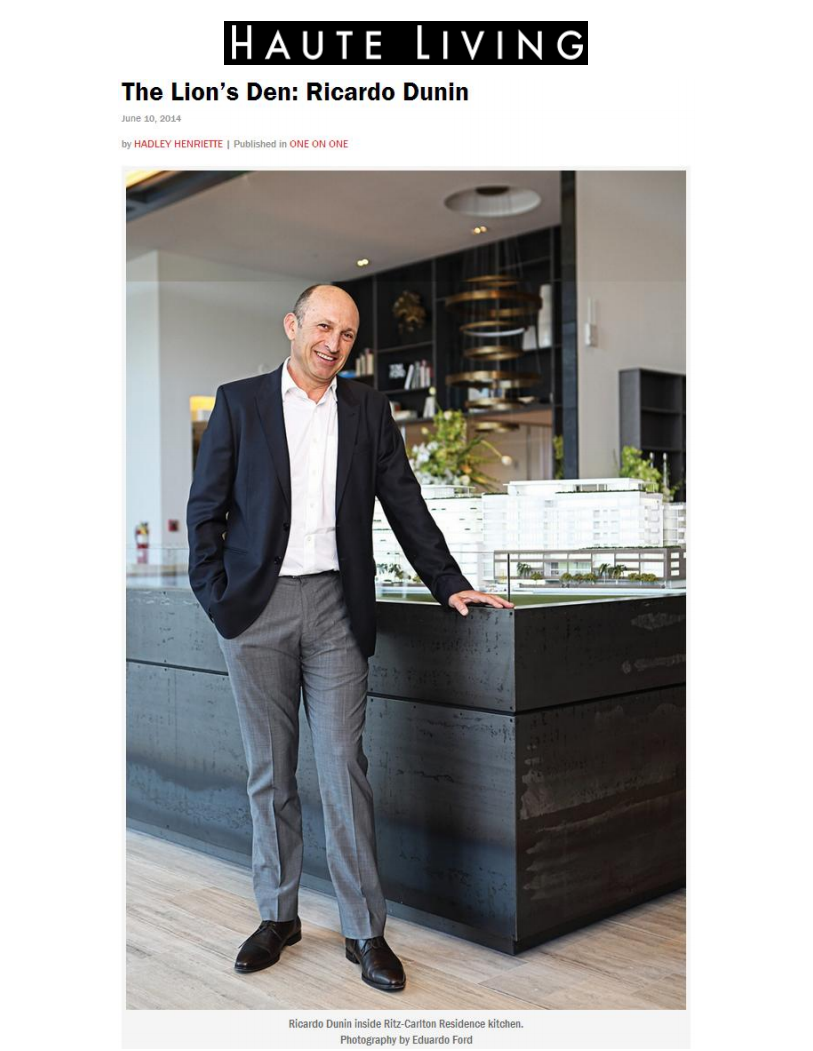 Lionheart Capital’s Ricardo Dunin has conceived some of Miami’s most inspired development projects: The Mutiny Hotel, Sonesta Coconut Grove Miami, Meridian Lofts and now, The Ritz-Carlton Residences Miami Beach, along with a whopping 25 other projects both stateside and in his native Brazil. Dunin was born in Minnesota to a Brazilian doctor who moved his family back to São Paulo when Ricardo was very young. He was raised there until the age of 17 when his family moved again to the less business-y, more exciting city of Rio. “They are very different cities,” says Dunin from an airy model condo at Ritz-Carlton Residences’ sales center. “But I think Rio is more fun, so if you are able to do business there, it’s better.” After attending Fundação Getúlio Vargas— South America’s most prestigious business school— Dunin went to work for his father who had left his medical practice and started a very successful HMO company, which employed 4,000 people and was a pioneer in the field.

He took an investment banking job in the city of Nashville, Tennessee to get a crash course in American business practices before heading to New York to work in real estate. At the same time, in the southern hemisphere, his father began dabbling in real estate also due to a non-compete that restricted his career moves after the sale of his company, so they started Sempar in Rio de Janeiro in the early 1980s. The company focused on the acquisition, development, management and brokerage of Class A office buildings in Rio. “Before we came in, there wasn’t much, just a few mom and pops,” he recalls. “So we decided to start a really professional commercial real estate brokerage, and within a couple of years, we had a 50 percent market share.”

He’s quick to point out the business was different then – there was no MLS and nobody was collecting sales data. “It was tough to know that a deal was a good deal,” he says. So Sempar started issuing their own reports and collecting their own data with a crack team. “Today if you look at the Rio market, a lot of the companies that exist today were from brokers we hired in the early stage of Sempar,” he says with a hint of pride. Business was going well, but crime was rising, and when Dunin’s wife became pregnant, they decided to make a move out of the country. The only question was “where?” After considering Europe, the couple settled on Key Biscayne and it wasn’t long before Dunin began sussing out development deals, starting with the Miami Airport Center.

Then came The Mutiny in Coconut Grove, a run down shell of a former hotel, which had once had a nightclub that was the place to be in Miami. “It had been the “who’s who” of the party scene, the cocaine cowboys – it all happened at The Mutiny,” he says. That was before it fell into disrepair and became a homeless haunt. Once the Dunin’s Flagler Group worked its magic, The Mutiny Hotel was once again beautiful hotel. But it wasn’t just a hotel, it was the first luxury condo-hotel in Miami, which was a better-known concept in Brazil and Europe at the time. “I spent half of my time explaining to people what a condo hotel was and what exactly to call it,” he jokes.
Despite Americans unfamiliarity with the concept, the project was a success and Flagler group went on to develop the adjacent property into Sonesta Coconut Grove Miami, a 22-story boutique hotel in the center of Coconut Grove. Aside from sweeping views of the Biscayne Bay, the Sonesta Coconut Grove boats a serious art collection giving guests the opportunity to see pieces by artists like Frank Stella and Robert Rauschenberg.

He went on to do the Meridian in 2003, a pie-shaped loft building in Miami Beach by famed Miami architect Bernard Zyscovich. The building won an award from the Miami Conservation League for seamlessly integrating with the city’s Art Deco architecture and incorporating green concepts. Another exceptional property he developed—Le Sereno in St. Barthelemy— a property that practically fell into his lap when he discovered the property he was staying at was for sale in 2000. It was a deal that came so quickly, that he had to find investors after he’d already signed the contract. He found one in partner Ignacio Contreras, who now owns the hotel. Together they renovated the 36-suite property with sublime minimalist- tropical design by Parisian designer Christian Liaigre. The hotel has become a haven for the jet set and celebrities that want to unwind, without distraction, in the lap of unfussy luxury. Interesting concepts and beautiful design are common threads throughout his many projects, showing both his talent and high taste level that the world is beginning to associate with Brazilian aesthetic: the confluence of the natural and minimal. “I think developers are like maestros of an orchestra,” he says reflectively. “They don’t really play any instrument, but they choose who plays and they direct. It’s about finding the best person to do the job, overseeing it and making sure the other players work well together.”

Four years ago Dunin took another leap forward when he became partners with Ophir Sternberg to create his current company, Lionheart Capital. “Lionheart Capital was really a merger between my old company, The Flagler Group and his company Oz Holdings.” Their first deal together was buying the majority share of two ocean front towers on Palm Beach County’s Singer Island that would become Ritz Carlton Residences Singer Island. “We bought it really well, and we sold it for about $700 a square foot, which is still very affordable,” says Dunin. “For us it was amazing, and for the buyer it was very good, and that’s the way it should be. You should leave something on the bone for the buyer.”
The Miami Heart Institute was on the market for a while. “It was a hospital and zoned as a hospital, but it was sold with a deed restriction not to be a hospital. It couldn’t be a residence and it couldn’t be a hospital, so [people felt] you couldn’t really do anything with it.” But when Lionheart Capital took a tour they realized its potential. “It was a lot of real estate, in a great location, for a great price and I said ‘Wow!’” He even won over the neighbors, who had been wary of the hospital’s redevelopment, and worried about what would become of the neighborhood eyesore. It was the gleaming plan by Italian architect Piero Lissoni that got them, and everybody else excited about the project.

Once Ritz-Carlton got on board, the unique mid-rise condominium situated on Surprise Lake, in a quiet residential Miami Beach neighborhood, was a home run. The property boasts 111 spacious units featuring Boffi kitchens and airy, modern design as well as 15 separate, freestanding villas, (eight which are waterfront) and will be the epitome of quiet-yet-luxurious Miami Beach living. Although it is not a hotel, the amenity list is long: dock space for yachts, a pet spa, a restaurant for residents, screening room and Ritz-Carlton services such as a concierge. There is a sexy wood and fiberglass VanDutch boat docked behind the building that will live there and take owners to the beach and other cool waterfront locations like The Standard. The boat, the soaring designs and the vision to see something when no one else did, are what will continue to make Dunin and his Lionheart Capital roar for years to come.