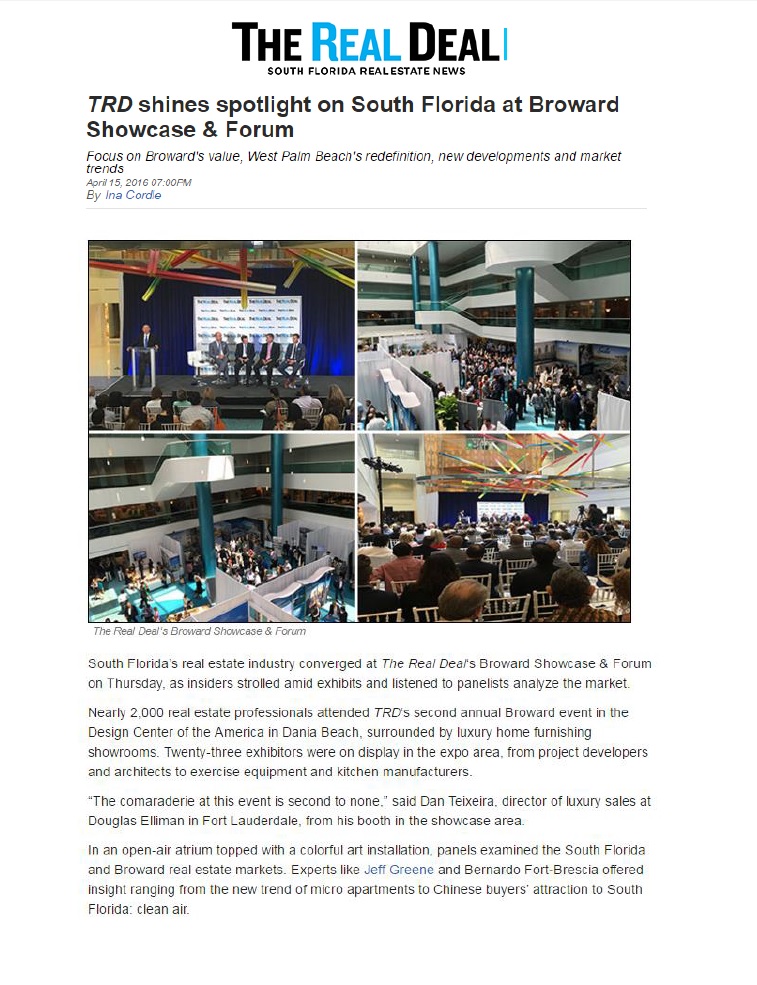 Nearly 2,000 real estate professionals attended TRD‘s second annual Broward event in the Design Center of the America in Dania Beach, surrounded by luxury home furnishing showrooms. Twenty-three exhibitors were on display in the expo area, from project developers and architects to exercise equipment and kitchen manufacturers.

“The comaraderie at this event is second to none,” said Dan Teixeira, director of luxury sales at Douglas Elliman in Fort Lauderdale, from his booth in the showcase area.

“This is The Real Deal bootcamp of real estate,” said George Mato, vice president of sales for the Ritz-Carlton Residences, Miami Beach. “This is a great educational tool for all the real estate professionals in the industry.”

A recurring theme was that strong value that can still be found in Broward. “Within South Florida, the one [area] that makes the most sense for investors is Broward,” said Harvey Hernandez, president and CEO of Newgard Development Group, speaking at the “Broward Deep Dive” panel. “It’s all about value, value, value. We are seeing capital coming from Miami-Dade searching for that value.”

In fact, of 417 new condo projects with 51,000 residential units in the pipeline east of I-95, 19 percent are in Broward, said Peter Zalewski, a TRD columnist and founder of research firm CraneSpotters.com, who moderated the panel.

And unlike new developments in Miami-Dade, panelists said they have discovered that Broward projects tend to attract primarily domestic buyers.

“When we first launched Auberge [Beach Residences Fort Lauderdale] a year-and a half ago, we didn’t know what to expect,” said Patrick Campbell, vice president of the Related Group, a dominant force in Miami-Dade condo development. “Is it an international market? Is it a local market?”

He said he learned that the outcome is local buyers, with 85 percent to 95 percent of sales to local end-users. “And to our surprise, they are wealthy. There is pent-up demand for luxury.”

Yet some of Related’s uncertainty lingers. The company is still trying to determine whether its Icon Las Olas development should be rentals or condos, Campbell said. “We want to let the market decide,” he said.

Currently, many Broward condo projects are attracting empty nesters from the western suburbs who are looking to downsize, panelists said. Jean Francois Roy, founder of Ocean Land Investments, which is developing several projects in Broward, was drawn to the county after the last recession due to value. “We decided to develop projects for the baby boomers,” he said. Ninety-five percent of his buyers are from Broward County.

Demand for office space is also driving new development. In western Broward, the office and retail markets are “very strong,” amid a residential slowdown, said Joseph Kavana, speaking on the panel “South Florida Development Outlook.” His firm K Group Holdings is developing Metropica, a $1.5 billion, 65-acre master-planned community in Sunrise that will have four million square feet when it’s completed.

Kavana will break ground on Metropica’s retail component in September, and the firm is sticking to a five-year timeline for the project. “Metropica is a phased development. We can do one building at a time,” he said. “We knew before we started we were going to hit, one way or another, a low cycle.”

Further north, in West Palm Beach, Greene is in the midst of a development boom all his own. His plans include One West Palm, designed by Arquitectonica, which will bring 340,000 square feet of Class A office space. “If a Class A tenant wants to come to West Palm Beach today, it’s just not possible,” Greene said.

A downturn won’t discourage him. “As far as the cycle goes, we’re just doing one or two projects at a time,” Greene said. “What’s going to dictate the path of how fast we develop will be supply and demand and market forces.”

Greene is also proposing micro apartments, which panelist Fort-Brescia, founding principal of Arquitectonica, likened to the tight spaces of a yacht, where every inch counts. Current trends, he said, in addition to micro units, are flex space in office space, and food and beverage on the retail side.

Fort-Brescia sees West Palm Beach in the midst of a “redefinition” from its roots as a resort. “I think the projects and the micro units are an integral part of making West Palm Beach a real city,” he said.

Among his projects, he is designing buildings for China City Construction in Miami Beach and on Brickell, and he views increasing interest in Florida from China in part because of the value the Chinese place on clean air.

While panelists acknowledged that the market has slowed in recent months, Beth Butler, president of Compass Florida, said March showed improvement, and there’s much less supply than what’s widely reported. In Miami-Dade, she said new construction on the market is anywhere from 3,000 to 5,000 units. “We don’t have this tremendous supply in the market,” she said.

Butler also said developers lowering deposits is more of a closeout sale, and not a sign of distress. “As these buildings come to close they become more attractive to buyers,” she said. “If there’s a lesson people probably learned in the last downturn it’s to correct faster. I believe that when there is a small blip.”

Fernando de Nuñez y Lugones, executive vice president of ONE Sotheby’s International Realty’s luxury condo development division, has witnessed the market dive. “This was the worst season ever for us,” he said, and he expects the condo market to flatten in 2016 and 2017.

Yet de Nuñez said the scarcity of land will make everything more costly in the next cycle. “Today is a good opportunity to pick up units because next cycle will be more expensive,” he said. “I bet my life on that. 2020 will be a different game.”

In the future, buyers can expect to see more condo projects with retail at ground level, and the growing emergence of hip areas like Flagler Village in Fort Lauderdale — along the lines of Miami’s Wynwood neighborhood.

“For a long time we have been in the shadow of Miami,” he said. “Now that prices have started to crystalize, there’s an influx of money and investment.”