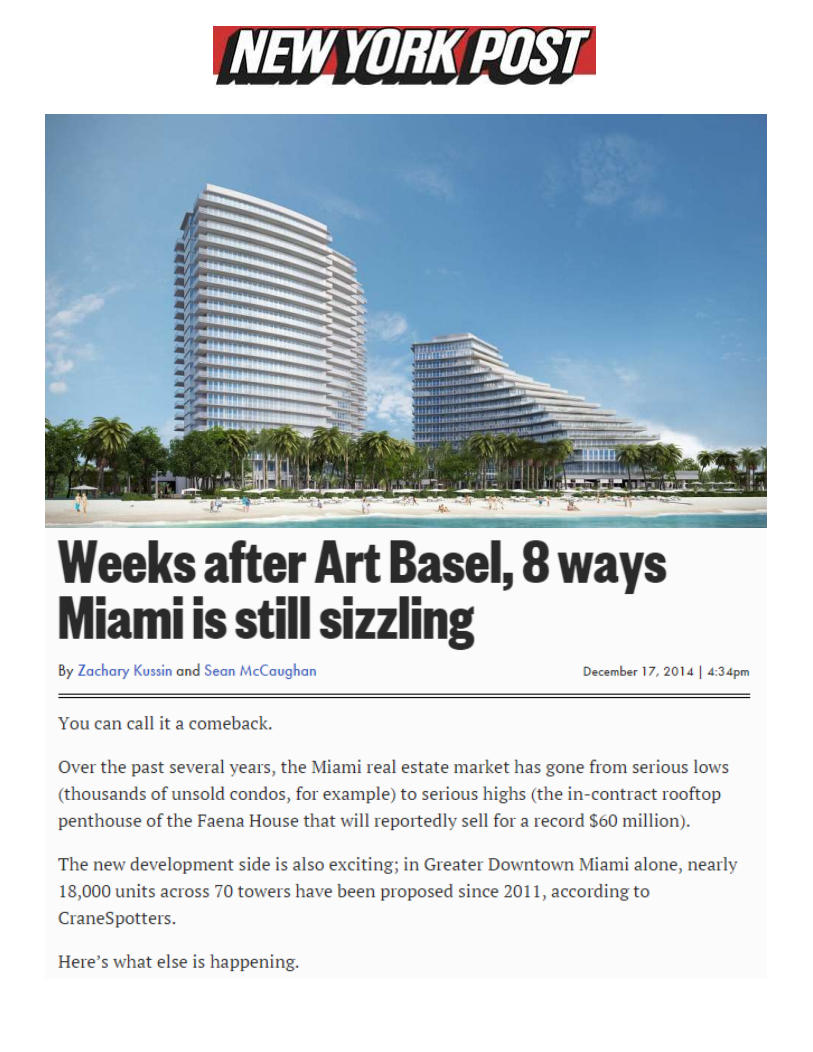 You can call it a comeback.

Over the past several years, the Miami real estate market has gone from serious lows (thousands of unsold condos, for example) to serious highs (the in-contract rooftop penthouse of the Faena House that will reportedly sell for a record $60 million).

The new development side is also exciting; in Greater Downtown Miami alone, nearly 18,000 units across 70 towers have been proposed since 2011, according to CraneSpotters.
Here’s what else is happening.

With beachfront running low in Miami and construction costs lower slightly north in Fort Lauderdale, Miami heavy-hitters Fortune International and the Related groups are teaming up here with the Fairwinds Group to build a 171-unit luxury beachfront condo billed as the first of its kind.

“Fort Lauderdale is primed for Miami-style high-quality projects, which will be enhanced by the charm and beauty Fort Lauderdale always offered,” says Fortune International’s Edgardo Defortuna. Dubbed the Auberge Beach Residences & Spa (the property and resort-style amenities will be managed by hotel operator Auberge Resorts Collection), this development will span two buildings.

Units will measure 1,500 to 5,000 square feet, have two- through five bedrooms, prices ranging $1.5 to $8 million and all will have ocean views. Some units will have oversized terraces with private pools.

Construction will kick off in 2015.

But in Miami, ads are out for the 60-story Auberge Residences & Spa at 1400 Biscayne Boulevard, which the Related Group is developing.

Modal TriggerParis’ posh Maison&Objet decorative fair is coming to Miami in May with seriously chic expectations.

Maison&Objet — the long-standing Paris trade fair dedicated to high-end lifestyle, decoration and design — makes its stateside debut in Miami Beach on May 12. But this solo show happens at the end of the season — months after Art Basel and Design Miami draws hordes of deep-pocketed folks to the city.

The annual fair will set up shop at the Miami Beach Convention Center. The intent is to expand the show to lure the “sizable” and “untapped” markets of the Americas and Caribbean. The show has already grown internationally after launching in Singapore this past March.

“Miami is an American city that pulses with the energy of Latin America, and has already proven itself to be conducive to the convergence of art and business,” says Philippe Brocart (inset), managing director of SAFI — the organization that owns and operates Maison&Objet.

A record in the making

Faena Group’s the Residences at Faena Hotel Miami Beach, formerly the Saxony Hotel, is the latest development in the rapidly-expanding Faena District and will have a total of 13 fully furnished penthouses, and one of them has broken a new barrier.

The six-bedroom, nine-bathroom duplex has listed for a cool $55 million, making it the most expensive condo up for grabs in Miami. Its features also pack a punch: Roughly 9,780 square feet of interior space and 4,435 square feet of terraces with panoramic views of the ocean and Downtown skyline.

Designed by film director Baz Luhrman and costume designer Catherine Martin, the condos are set to be finished next fall. The debut should coincide with the opening of the Faena Hotel and Faena Forum — an art-filled center designed by Rem Koolhaas of Holland.

Modal TriggerAcross Miami, private villas are popping up at choice developments including the Ritz-Carlton Residences (above) by Piero Lissoni.Photo: DBOX

Privacy is a standout amenity. This is why developers are now including separate single-family villas in their overall plans. “It is a very unique product in the Miami Beach marketplace to have the services and maintenance-free lifestyle of a condominium while still enjoying the privacy of a stand-alone home,” says Ophir Sternberg of Lionheart Capital.

The Ritz-Carlton Residences in Miami Beach, which Lionheart is developing, will have 15 unattached villas, eight of which are waterfront. These three- to four-bedroom properties will run 3,400 to 5,000 square feet, with prices spanning $5 million to $7 million. Oceana Key Biscayne includes 12 detached villas (four are still for sale), each of which total 5,187 square feet.

The villas have balconies of 374 square feet, plus 1,636-square-foot terraces with heated pools and prices spanning $5.4 to $6 million.

Meanwhile, Don Peebles’ planned Bath Club Estates will offer something neat: Two side-by-side oceanfront “villas” — which are each massive private duplex units with 9,200 interior square feet and 4,126 square feet of outdoor space each asking $22.5 million. Best of all, they can easily be combined.

With celeb residents like photographer Bruce Weber and designer Tommy Hilfiger, Golden Beach has emerged as Miami’s ‘hood of the moment.

That’s because it’s the only place in town with homes directly on the Atlantic Ocean. Last year, Hilfiger scored a 15,000-square-foot modernist manse for $25 million. Although new homes are rare in Golden Beach, architect Chad Oppenheim is designing a 20,000-square-foot home at 699 Ocean Blvd expected to fetch some $36 million, says Douglas Elliman broker Oren Alexander, who will rep the listing.

“The home’s spa will take up its entire first floor,” says Alexander. Oppenheim is also working on a smaller, more modestly-priced home there, while architect Rene Gonzalez is designing a seriously grand compound for a billionaire Latin American family.

The latest Miami real estate must-have is on-site urban farms and gardens. Related’s Brickell Heights will include plots designed by urban gardening specialists Ready-to-Grow for residents to raise their own plants and vegetables.

On South Beach, LeFrak’s 1 Hotel & Homes on 23rd Street and Collins Avenue will have a herb garden for use of the property’s food and beverage operations serving both hotel and condo guests, which will be overseen by Tom Colicchio.

And TSG Paragon’s Cassa Brickell will have a residents’ garden on the rooftop sun deck. Garden specialist Le Petite Fleur Miami will oversee the greenery.

Modal TriggerActor Adrian Grenier is part of the creative team behind Filling Station Lofts showroom in Miami, which opened in late October.

Developer NR Investments, which is working to grow a Downtown arts and entertainment district, teamed up this fall with film producer Peter Glatzer and actor/filmmaker Adrian Grenier to curate a showroom in NR’s Filling Station Lofts with art and sustainable furnishings to promote the vision of the pair’s lifestyle platform SHFT.com.

This helps push what the developer envisions for the area, which is a creative hub in which residents can live healthier.

Few Miami ’hoods have recovered from 2008’s real estate crash as strongly as Sunny Isles, where 17 new condo towers are slated for construction.

Three towers stand out for their sheer audacity.

There’s developer Gil Dezer’s 60-floor Porsche Design Tower, whose 132 units will include private garages within the condos themselves.

Prices will reach $32.5 million. Nearby, the 46-floor Mansions at Acqualina should finish next year and include a 15,000-square-foot, $50 million penthouse.

Acqualina’s developers have also just launched The Estates at Acqualina with 90 units priced from $5.9 to $40 million.

The 192-unit tower will feature futuristic design and underground parking.

Prices range from $3 million to $30 million.